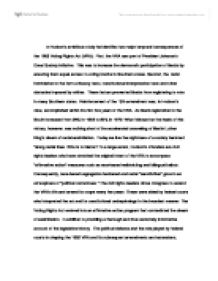 In Hudson's ambitious study he identifies two major temporal consequences of the 1965 Voting Rights Act (VRA):. First, the VRA was part of President Johnson's Great Society initiative. This was to increase the democratic participation of blacks by ensuring them equal access to voting booths in Southern states. Second, the r****t intimidation in the form a literacy tests, constitutional interpretation tests and other obstacles imposed by whites. These factors prevented blacks from registering to vote in many Southern states. Reinforcement of the 15th amendment was, in Hudson's view, accomplished within the first five years of the VRA. As black registration in the South increased from 29% in 1965 to 56% in 1970. What followed on the heels of this victory, however, was nothing short of the accelerated unraveling of Martin Luther King's dream of racial assimilation. Today we live the nightmare of a society hemmed "along racial lines. Who is to blame? To a large extent, Hudson's offenders are civil rights leaders who have stretched the original intent of the VRA to encompass "affirmative action" measures such as race-based redistricting and bilingual ballots. ...read more.

For example, in the course of describing a 1988 law suit against the city of Dallas alleging that single-member districts should displace multi-member districts to increase minority voting power. Hudson portrays Roy Williams, one of the plaintiffs, in the following way: "Roy Williams, a six-foot-six, forty-seven-year-old black, was a self-employed Dallas businessman who had run for city council but had been defeated by a white candidate in an at-large race. He had been found guilty of driving while intoxicated three times, but later claimed to have had a spiritual awakening which led him into counseling others for substance abuse. He lived in a north Dallas condominium, ate at the French bakery near SMU, and toted a book bag filled with books on spiritualism and philosophy. Williams described himself as a spiritualist who meditated five hours a day, and claimed he had begun fasting to focus his attention on the trial." Rather than supporting Hudson's claim that civil rights leaders stretched the VRA beyond its original purposes, these kind of journalistic refrain, diminish from issues relevant to the legitimate question of whether or not the amendments and extensions to the 1965 VRA have gone too far. ...read more.

At the end of the book Hudson draws three bold conclusions: "The act lacked any measurable goals, thus allowing it to run far from of its original intent. The act's inclusion of language minorities turned it from an equal opportunity act to a social reallocation program. Rather than overcoming the long-term effects of race, the Act's 1982 results test maximized racial contention through inequitable voting schemes." This will serve as a useful resource for those desiring a run-down of what happened, when and how in the long and continuing battle over the voting rights of blacks, Native Americans and Hispanics. Hudson's expansion of the discussion beyond the black-white racial paradigm to include the complicating stories of Native Americans and Hispanics is salutary. Moreover, his effort to desegregate all three of these minority labels in the specific contexts of the communities he examines is an important reminder of the mitigating factors in politics. Overall I found that the work of Hudson was clear for the most part. He did well in providing several opinions' on this issue, although it is hard to determine exactly what they were. ...read more.