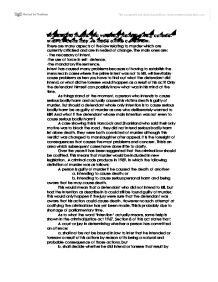 In relation to murder, consider what critisicms may be made on the current law.

In relation to murder (inc voluntary manslaughter), consider what criticisms may be made on the current law. There are many aspects of the law relating to murder which are currently criticised and are in ne3ed of change. The main ones are: - the necessary of intent. -the use of force in self- defence. -the mandatory life sentence. Intent has caused many problems because of having to establish the mens rea in cases where the prime intent was not to kill, will inevitably cause problems as hen you have to find out what the defendant did intend, or what did he foresee would happen as a result of his act? Only the defendant himself can possibly know what was in his mind at the time. As things stand at the moment, a person who intends to cause serious bodily harm and actually causes his victims death is guilty of murder. But should a defendant whole only intention is to cause serious bodily harm be as guilty of murder as one who deliberately wanted to kill? And what if the defendant whose main intention was not even to cause serious bodily harm? ...read more.

Again the law commission in its report offences against the person and general principles 1993, proposed that the word 'intentionally' should be defined as this: A person acts intentionally with respect to a result when: a. it is his purpose to cause it; or b. although it is not his purpose to cause it, he knows that it would occur in the ordinary course of events if he were to succeed in his purpose of causing some other result. The introduction of this reform would go a long way to stop confusing situations. Self defence The criminal law act 1967, states that a person may use ' such force as in reasonable in the circumstances' in self defence or to prevent a crime being committed. What is reasonable depends on what the defendant honestly and instinctively though the needs of the moment to be. The situation as it stands at the moment therefore is that a person who kills in self-defence, or to prevent a crime, either: - has complete defence, in which case he is innocent of the charge of his murder; or - is his use of force is considered to be disproportionate, he is found guilty of murder. ...read more.

Suggestion for the reform of the law in this matter continue to be made. If life imprisonment dose not actually mean for life then why call it life imprisonment and insist on it being passed? One suggestion is to abolish the mandatory life sentence and make it discretionary which basically means the judge has the power to pass any sentence up to and including the maximum sentence available for that crime, depending on the seriousness of the offence. Another suggestion is that different degrees of murder could be introduce, in thus way the most serious murders would attract a mandatory life sentence and less ones would attract a discretionary life sentence. When imposing the mandatory life sentence, a judge has the power to recommend that the defendant serves a minimum number of years before being released. He can also recommend that a defendant should never be released; life imprisonment meaning literally for life. By making such recommendations, a judge can reflect the seriousness of the offence. It may be for this reason that no moves have yet been made to abolish the mandatory life sentence. The potential areas of reform of voluntary manslughter are the two defences to it- provocation and diminished responsibility. One of the main difficulties with the defence of provocation ...read more.