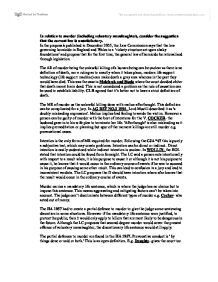 In relation to murder (including voluntary manslaughter), consider the suggestion that the current law is unsatisfactory.

In relation to murder (including voluntary manslaughter), consider the suggestion that the current law is unsatisfactory. In the proposals published in December 2005, the Law Commission says that the law governing homicide in England and Wales is a 'rickety structure set upon shaky foundations' and propose that for the first time, the general law of homicide be rationalized through legislation. The AR of murder being the unlawful killing of a human being can be unclear as there is no definition of death, nor a ruling as to exactly when it takes place, modern life support technology (life support machine) can make death a gray area whereas in the past they would have died. This was the case in Malchrek and Steele where the court decided obiter that death meant brain dead. This is not considered a problem as the rule of causation can be used to establish liability. CLR agreed that it's better not to have a strict definition of death. ...read more.

The LC said a person acts intentionally with respect to a result when, it is his purpose to cause it or although it is not his purpose to cause it, he knows that it would occur in the ordinary course of events if he was to succeed in his purpose of causing some other result. This can lead to confusion in a jury and lead to inconsistent verdicts. The LC proposes the D should have intention where s/he knows that the result would occur in the ordinary course of events. Murder carries a mandatory life sentence, which is where the judge has no choice but to impose this sentence. This means aggravating and mitigating factors can't be taken into account. The judge can't discriminate between different types of murder e.g. Cocker- who acted out of mercy. The HA 1957 had to create a partial defence to murder to give the judge some sentencing discretion in some situations. ...read more.

In Duffy it was said that the loss of temper must be sudden and temporary. This defence is seen as one that favors men as women in cases like Ahluwalia and Thornton act out of fear but don't have the defence of provocation. A sudden reform would be to remove the need for a sudden and temporary loss of control and simply return to a loss of control taking all the relevant factors into consideration. A new defence may be created called 'self preservation' that would take into account the way women react. In Holley the PC ruled that the jury should expect the level of control of an ordinary person of D's age and s*x. Personal characteristics are only taken into account in deciding the gravity of the provocation. The LC proposes that the objective test should be based on a person of D's age and temperament. This supports the PC decision in Holley. If all the LC reforms were implemented, the criticisms would be addressed and the law on homicide will be improved. ...read more.