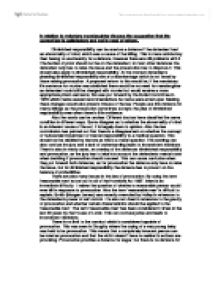 In relation to voluntary manslaughter discuss the suggestion that the current law is satisfactory and not in need of reform.

In relation to voluntary manslaughter discuss the suggestion that the current law is satisfactory and not in need of reform. Diminished responsibility can be used as a defence if the defendant had an abnormality of mind, which was a cause of the killing. This is more satisfactory than having to use insanity for a defence, however there are still problems with it. The burden of proof should not be on the defendant, in most other defences the defendant only has to raise the issue and the prosecution has to disprove it. This should also apply to diminished responsibility. At the moment defendants pleading diminished responsibility are at a disadvantage which is not faced by those raising provocation. ...read more.

Also the law commission has pointed out that there is a disagreement on whether the concept of 'substantial impairment of mental responsibility' is a medical question. This should not be decided by doctors as this is a moral question. The wording can also confuse the jury and a lack of understanding leads to inconsistent decisions. There is also in many cases, an overlap of the defences diminished responsibility and provocation, as the jury has to take into account the defendants mental state when deciding if provocation should succeed. This can cause confusion when they put forward both defences, as for provocation the defence only have to raise the issue, but for diminished responsibility the defence has to prove it on the balance of probabilities. ...read more.