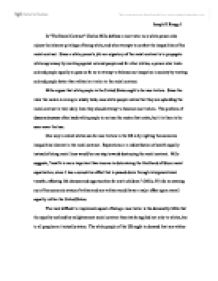 In &quot;The Racial Contract&quot; Charles Mills defines a race traitor as a white person who rejects the inherent privilege of being white, and who attempts to combat the inequalities of the racial contract.

These are values that are created not from cognitive reasoning, but instead from emotions that arise from our feeling modes. "We as human beings experience values as a primary element of our original perception of situations and objects, rather than as a separate and secondary re-description of an originally value-free experience." (Green, 112) Value conflict is a major reason for strife between peoples. Locke argues though that an individual is capable of changing the feeling mode that one is in, and thereby arriving at a new value that no longer conflicts with others values. By changing the underlying imperative of feeling true value change can occur. "We can to some extent consciously, reflectively choose to adopt a different attitude or mode of feeling laden perception toward the object or situation." (Green, 113) An important aspect of imperatives of feeling is that they are spread culturally. "Certain value feeling-modes tend to become dominant though never universal among people who share a form of life within a relational economic and geopolitical situation." (Green, 114) ...read more.

"Trying on the other's preferred lens may allow us to see the object or situation approximately as the other sees it, which will bring a certain appreciation of the resultant value perceptions. (Green, 115) Another aspect of imperatives of feelings is, "As a working principle, it divorces proper value loyalty from unjustifiable value bigotry releases a cult from blind identification with creed and dogma, and invests no value interest with monopoly or permanent interest." (Green, 116) This is important because it allows whites to separate the values of whiteness from cultural values that are proper and should be continued. Being a race traitor does not mean abandoning white culture, it means abandoning those aspects of white culture that oppress non-whites. Locke's imperatives of feelings help to justify and support the views of Charles Mills as outlined in "The Racial Contract". The idea provides a framework for the race traitor to be created, and to create new value systems from the old system of whiteness. In this area it is invaluable. It also allows for the reciprocity between cultures that is necessary for the eventual destruction of the racial contract and the creation of true social contracts. Joseph R Knupp 1 ...read more.