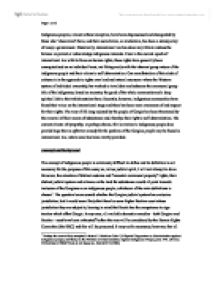 Indigenous peoples, almost without exception, have been dispossessed and disregarded by those who 'discovered' them, and their assimilation, or eradication, has been a stated policy of many a government.

Indigenous peoples, almost without exception, have been dispossessed and disregarded by those who 'discovered' them, and their assimilation, or eradication, has been a stated policy of many a government. Historically, international law has done very little to redress the balance or protect or acknowledge indigenous interests. Even in the current epoch of international law with its focus on human rights, these rights have generally been conceptualised on an individual basis, not fitting easily with the inherent group nature of the indigenous people and their claims to self-determination. One manifestation of this clash of cultures is in the approach to rights over land and natural resources: where the Western system of individual ownership has worked to invalidate and subsume the communal group title of the indigenous, based on ancestry, the good of the whole community and a deep spiritual link to that which sustains them. Recently, however, indigenous communities have found their voice on the international stage and there has been more awareness of and respect for their rights. The way of life long enjoyed by the people of Gorgia has been threatened by the removal of their means of subsistence and, thereby, their right to self-determination. The current climate of sympathy, or perhaps shame, felt in relation to indigenous people does provide hope that an effective remedy for the problem of the Gorgian people may be found in international law, where none has been overtly provided. Assumptions/Background The concept of indigenous people is notoriously difficult to define and its definition is not necessary for the purposes of this essay so, in true judicial spirit, I will not attempt to do so. However, the retention of distinct customs and "ancestral communal property" rights, their distinct judicial system and reliance on the land for subsistence would all point towards inclusion of the Gorgians as an indigenous people, whichever of the main definitions is chosen1. The question leaves unsaid whether the Gorgian judicial system has exclusive jurisdiction, but it would seem likely that there be some ...read more.

In Lovelace v. Canada14, the Committee noted that "not every interference can be regarded as a denial of rights within the meaning of article 27 ... (but) restrictions must have both a reasonable and objective justification and be consistent with the other provisions of the Covenant."15 In the Lansman case, the Committee decided that the impact of quarrying was not so substantial as to remove the authors' ability to provide for themselves in the traditional way, and therefore did not breach article 27. While the quarrying may have caused some inconvenience or disruption to the authors, it could not be said to be an effective threat to their way of life. If the Gorgians were using modern methods of fishing, and the Torban fishermen were merely providing competition, rather than completely or largely removing the ability of the Gorgians to make a living, then this may not be a violation of article 27 at all. The Gorgians, therefore, would have to show that the 2001 treaty did constitute such a threat to their way of life: either that the methods used by the Gorgians were traditional so that they could not compete with the more advanced Torban fishing techniques; or that the competition lead to over-fishing to the extent that their way of life was no longer viable. One factor which helped the Lubicon Lake Band's case was the effect that the removal of their traditional means of subsistence had on the people of the Band. There were submissions to the effect that "the spectre of alcoholism, previously unheard of in this community ... is now overwhelming it."16 Perhaps exactly the same standard of damage would not be required for the success of the Gorgian claim, but certainly the HRC would require a higher level of damage to the community than could be demonstrated in the Lansman case. One of the basic tenets of self-determination of indigenous peoples is the right to be consulted on measures which will effect them17. ...read more.