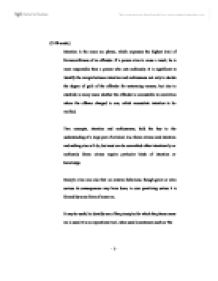 Intention is the mens rea phrase, which expresses the highest level of blameworthiness of an offender.

(1518 words.) Intention is the mens rea phrase, which expresses the highest level of blameworthiness of an offender. If a person aims to cause a result, he is more responsible than a person who acts recklessly. It is significant to identify the margin between intention and recklessness not only to decide the degree of guilt of the offender for sentencing reasons, but also to establish in many cases whether the offender is accountable to conviction where the offence charged is one, which necessitate intention to be verified. Two concepts, intention and recklessness, hold the key to the understanding of a large part of criminal law. Some crimes need intention and nothing else will do, but most can be committed either intentionally or recklessly. Some crimes require particular kinds of intention or knowledge. Kenny's view was also that: no external behaviour, though grave or even serious its consequences may have been, is ever penalizing unless it is formed by some form of mens rea. It may be useful to identify one of the principles for which the phrase mens rea is used. It is an expositional tool, when used in sentences such as 'the mens rea of X offence is Y', where Y might be intention, recklessness, malice, dishonesty, an intent to defraud or deceive. (A.T.H. Smith) Williams considers intention and recklessness as basic mens rea in that a defendant's responsibility should be dependent on his knowledge of the significant conditions surrounding, and consequences of, his behaviour. ...read more.

He argued that in popular speech there is no distinction between the person who recognises a risk and goes on nevertheless and the person who never addresses his mind to the obvious risk at all. The law, said Lord Diplock, should not perpetuate 'fine and impracticable distinctions'. Reckless is a word in normal speech and means not only taking predictable and pointless risks but also the failure to see such risks: There must be an obvious risk, depending on the circumstances in which the defendant acted. This is a risk, which would be obvious to the reasonable person R. v. Sangha (1988) 1 W.L.R. 519. Once the obvious risk is proved, it matters not whether the accused realised that there was a risk and decided to take it or whether he never realised that there was a risk at all either way the defendant is accountable. Baroness Wootton agrees on this point (along with may other points made by Lord Diplock) by saying "If the law says that certain things are not to be done, it is illogical to confine this prohibition to occasions on which they are done from malice aforethought: for at least the material consequences of an action, and the reason for prohibiting it, are the same whether it is the result of sinister malicious plotting, of negligence or of sheer accident". There is a powerful disagreement from Edmund-Davies and Wilberforce. ...read more.

On the query of moral evaluation, two contrasting positions have been urged, and they have been phrased the subjectivist and the objectivist. The consequences are not important for moral blame. By way of contrast, the objective view treats the consequences flowing from conduct as part of the act itself, and considers any division between act and consequences as unpersuasive. For the objectivist, the consequences must be taken into account when considering moral liability. (A. Ashworth) Yet Baroness Wootton stated "mens rea has got into the wrong place. Traditionally, the requirement of the guilty mind is written into the actual definition of a crime. No guilty intention, no crime, is the rule. In conclusion, to the above discussions, it would be obviously insufficient for a legal system to have a solitary offence stating that anybody who performs in a way that is opposing to the good of society may be liable to conviction and sentence of up to life imprisonment. Its communicative purpose would be unbearably vestigial, its censuring purpose would be terribly unclear, and the discretion left at the sentencing phase would bestow vast power on the courts on what would then be the key issue. This proposes that a rule of reasonable classification should develop part of a system of criminal law, so as to guarantee that each crime is distinct and considered in a way which expresses the relative seriousness of the offence, and which limits the court's sentencing abilities suitably. - 1 - ...read more.