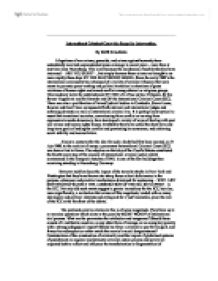 International Criminal Court-the Scope for Intervention. By Kirill Kruchinin Allegations of war crimes, genocide, and crimes against humanity have undoubtedly received unprecedented press coverage in recent years - more than at any time since Nuremberg. This is not because the incidences of such barbarities have increased - ARE YOU SURE? - , but simply because those crimes are brought to us more rapidly these days BY THE ELECTRONIC MEDIA. Since the early 1990's the international community has witnessed of a variety of criminal tribunals that were meant to promote peace-making and political transition in situations of gross violations of human rights and armed conflict among ethnical or religious groups. This tendency led to the establishment BY THE UN of two ad hoc Tribunals-for the former Yugoslavia and for Rwanda-and OF the International Criminal Court (ICC). There was also a proliferation of 'mixed' judicial bodies-in Cambodia, Sierra Leone, Kosovo and East Timor-composed of both national and international judges and enforcing domestic as well as international criminal law. It is perhaps most cynical to assert that transitional societies, convalescing from conflict or moving from oppression towards democracy, have developed a variety of ways of dealing with past war crimes and human rights abuses. ...read more.

In particular, the powers of judges were strongly curtailed to assuage the fears of a number of states that the Court could infringe upon their sovereignty. The results will invariably preclude the necessary judicial development of the law and restrict the judges substantially to a mechanical function. These limitations appear to demonstrate certain mistrust by various States in the independence of international criminal courts, and they also raise a number of questions concerning the ability of the International Criminal Court to function efficiently as a court of law and the ability of its judges to fulfil their mandate. A notion put forward by a distinguished International Law professor - GIVE HIS NAME - highlights an additional difficulty the ICC faces, stating that "crimes against humanity, war crimes, and genocide, are highly context-specific." They are acts committed either during war (between or within nations) or by repressive regimes that when these crimes are finally addressed, it is usually during enormous social and political upheaval: the negotiation of a peace treaty, restoration of legitimate political rule, or some similar milestone. In such circumstances, there are typically other priorities to be considered than just punishing those who committed crimes during the preceding turbulence. ...read more.

Clearly International justice and the role of the Tribunals, is not about unfair retribution; if that were the case, humanity should forget about reconciliation and its off-shoot, peace. It is not about vengeance, using the pen as the firearm, much as the victims' plight has been acknowledged; that would be erroneous, such a practice would amount to accepting the erroneous view that you can conquer hatred with hatred. However after considering alternatives to prosecution it is difficult to express a preference among them, other than the vague notion that "perhaps the challenge is to meet a basic need for balance and wholeness." Neither the "one size fits all" prosecutorial strategy, nor a uniform preference for amnesty or some non-juridical alternative in every case, would be justifiable. Circumstances differ, and circumstances matter. Atrocities, whether committed abroad or at home, are almost by definition highly unusual. For precisely that reason, their resolutions should be too. Ironically, perhaps, a court that is very similar to these from a legal point of view is likely to soon be established in Iraq. You make some good and thought-provoking points, but your language is not always as clear as it might be. Clarity is of supreme importance in law! Istvan ...read more.