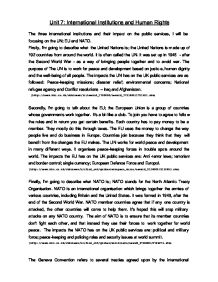 Unit 7: International Institutions and Human Rights The three international institutions and their impact on the public services, I will be focusing on the UN; EU and NATO. Firstly, I'm going to describe what the United Nations is; the United Nations is made up of 192 countries from around the world. It is often called the UN. It was set up in 1945 - after the Second World War - as a way of bringing people together and to avoid war. The purpose of The UN is to work for peace and development based on justice, human dignity and the well-being of all people. The impacts the UN has on the UK public services are as followed: Peace-keeping missions; disaster relief; environmental concerns; National refugee agency and Conflict resolutions - Iraq and Afghanistan. (http://news.bbc.co.uk/cbbcnews/hi/newsid_1720000/newsid_1721800/1721851.stm) Secondly, I'm going to talk about the EU; the European Union is a group of countries whose governments work together. It's a bit like a club. To join you have to agree to follow the rules and in return you get certain benefits. Each country has to pay money to be a member. They mostly do this through taxes. The EU uses the money to change the way people live and do business in Europe. ...read more.

The basic principals of the Geneva Convention also extend in particular to treating wounded soldiers at sea. Further, hospitals must be marked with a red cross and in plain sight so they will not be attacked. More particulars exist, but primarily these treaties exist so that captured or wounded soldiers can be treated humanely, and without prejudice. (http://usmilitary.about.com/od/deploymentsconflicts/l/blgenevaconv.htm) The Universal Declaration of Human Rights is a document which was drafted by the United Nations Commission on Human Rights after the close of the Second World War. The document was intended to more clearly define the "rights" mentioned in the charter of the United Nations, while also providing a clear and general definition of human rights for all member nations. The Declaration has since been translated into over 300 languages, and it is very widely referenced all over the world. One of the champions of the document was Eleanor Roosevelt, who sat as Chairwoman on the Commission when the document was drafted. Roosevelt also contributed a substantial amount of text to the Universal Declaration of Human Rights. On 10 December 1948, the document was officially ratified by 48 member nations, while eight abstained from voting. The Declaration is intended to promote equality and liberty, and it includes a number of articles which focus on basic legal protections, such as the right to a fair trial. ...read more.

actors abuse, ignore, or deny basic human rights (including civil, political, cultural, social, and economic rights). Furthermore, violations of human rights can occur when any state or non-state actor breaches any part of the UDHR treaty or other international human rights or humanitarian law. Wars of aggression, war crimes and crimes against humanity, including genocide, are breaches of International humanitarian law and represent the most serious of human rights violations. Violations exist in every part of the world. For example, Amnesty International's 2009 World Report and other sources show that individuals are: tortured or abused in at least 81 countries; Face unfair trials in at least 54 countries; Restricted in their freedom of expression in at least 77 countries. International Institutions collect evidence and documentation of alleged human rights abuses and apply pressure to enforce human rights laws. In efforts to eliminate violations of human rights, building awareness and protesting inhumane treatment has often led to calls for action and sometimes improved conditions. The UN Security Council has interceded with peace keeping forces, and other states and treaties (NATO) have intervened in situations to protect human rights. ( http://www.humanrights.com/what-are-human-rights/violations-of-human-rights/article-3.html) Some international institutions such as; NATO has no effect in the British public service whatsoever. NATO is an international organization created in 1949 by the North Atlantic Treaty for purposes of collective security. NATO has no effect in the British public service whatsoever. ...read more.