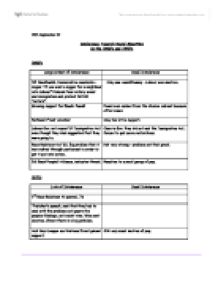 29th September 02 Intolerance Towards Racial Minorities In the 1960's and 1970's 1960's Large extent of Intolerance Small Intolerance '64 Smethwick, Conservative candidate - slogan "If you want a n****r for a neighbour vote Labour" Claimed Cons victory would end immigration and protect British "culture". Only one constituency - Labour won election. Growing support for Enoch Powell Powell was sacked from the shadow cabinet because of his views. National Front created Only had little support. Labour Gov. not repeal '62 Immigration Act even though they Had suggested that they were going to. Once in Gov. they did not end the Immigration Act, forced to put more restrictions. Race Relations Act '65. Big problem that it was rushed through parliament in order to get it put into action. Not very strong - problem not that great. ...read more.

At first only a few people came to Britain from the Caribbean. However a hurricane hit Jamaica in 1951, which caused a lot of destruction and increased the pace of emigration to Britain. In 1952 the immigration into the USA was heavily restricted so people who wanted to emigrate had to go somewhere else. Britain had lots of job vacancies so they decided to recruit workers from other countries. London Fares loaned the fare to get to Britain so that people could come here and work. In London and large cities life was expensive. Many of the people who loved in the cities had well paid jobs. They did not want jobs such as cleaning, driving and nursing. People from the colonies were encouraged to come to Britain to do this type of work. ...read more.

By 1961 economic growth had slowed down so not as many workers were needed. Also there was no longer a fear of recession. 1968 - COMMONWEALTH IMMIGRATION ACT Said: Kenyan Asian with a British passport no longer permitted into Britain. Entry to white Kenyans with a British passport still allowed. Reasons: 1968 feared a large number of Kenyan Asians would come to Britain because of the Africanisation policy introduced by Jomo Kenyatta. This policy looked to expel all foreigners from Kenya. Many of them intended to come to Britain. As racial tension in Britain increased a member of parliament Enoch Powell made speeches around the country warning of terrible consequences if immigration was to continue at such a high level. The Labour Gov. panicked and in just three days passed the second immigration act. 1971 - IMMIGRATION ACT: Patrials could enter Britain freely, to live and work. Non-patrials could not. Patrials were almost all white coming mainly from the Old Commonwealth. ...read more.