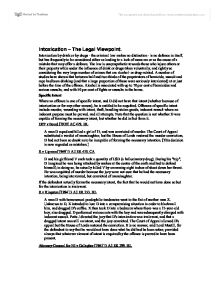 Intoxication - The Legal Viewpoint. Intoxication by drink or by drugs - the criminal law makes no distinction - is no defence in itself, but has frequently to be considered either as leading to a lack of mens rea or as the cause of a mistake that may offer a defence. The law is unsympathetic towards those who injure others or their property while under the influence of drink or drugs taken voluntarily, and rightly so considering the very large number of crimes that are alcohol- or drug-related. A number of studies have shown that between half and two-thirds of the perpetrators of homicide, assault and r**e had been drinking (and that a large proportion of these were seriously intoxicated) at or just before the time of the offence. Alcohol is associated with up to 70 per cent of homicides and serious assaults, and with 50 per cent of fights or assaults in the home. Specific intent Where an offence is one of specific intent, and D did not have that intent (whether because of intoxication or for any other reason), he is entitled to be acquitted. ...read more.

Offences of basic intent include manslaughter, r**e, malicious wounding and assault. R v Lipman [1969] 3 All ER 410, CA D and his girlfriend V each took a quantity of LSD (a hallucinatory drug). During his "trip", D imagined he was being attacked by snakes at the centre of the earth and had to defend himself; in doing so, he actually killed V by cramming eight inches of sheet down her throat. He was charged with murder and convicted of manslaughter. Upholding the conviction, the Court of Appeal said that since no specific intent is required for manslaughter, self-induced intoxication (whether by drink or drugs) affords no defence. DPP v Majewski [1976] 2 All ER 142, HL D took a mixture of drugs and alcohol and subsequently assaulted the landlord in a pub brawl. His conviction was upheld: D's intoxication was the result of his own voluntary reckless act, said the House of Lords, and the trial judge had rightly directed the jury that they were to ignore it in considering whether he had formed the necessary mens rea in a crime of basic intent. Lord Elwyn-Jones LC said that if a man of his own volition takes a substance which causes him to cast off ...read more.

His defence was automatism caused by hypoglycaemia, brought on by failing to take sufficient food after taking his prescribed insulin. The trial judge directed the jury that self-induced automatism could not be a defence, and the jury convicted on both counts. The Court of Appeal upheld the conviction on the facts of the case, but said Lawton LJ's dictum was perhaps too broad. If a defendant does appreciate the risks associated with a failure to take food after insulin, the jury may decide that his disregard of such a risk is reckless, but it depends on the circumstances. R v Allen [1988] Crim LR 698, CA D was charged with buggery and indecent assault (these being crimes of basic intent), but claimed he was so drunk he had not known what he was doing. He had drunk a certain amount of wine without realising how strong it was, and his intoxication should therefore be regarded as involuntary. Upholding his conviction, the Court of Appeal said that where a defendant knows he is taking alcohol, the drinking does not become involuntary just because he does not know its exact nature or strength. A drugged intent, even if the intoxication is involuntary, is still an intent. ...read more.