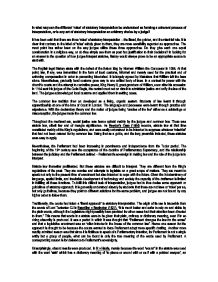 Is any act of statutory interpretation a arbitrary choice by a judge?

In what way can the different 'rules' of statutory interpretation be understood as forming a coherent process of interpretation, or is any act of statutory interpretation an arbitrary choice by a judge? It has been said that there are three 'rules' of statutory interpretation - the literal, the golden, and the mischief rule. It is clear that contrary to the label of 'rules' widely given to them, they are more sensibility regarded as approaches. The moot point has rather been on the way judges utilize these three approaches. Do they give each one equal consideration in a religious way, or do they simply use them as post hoc justification to their decisions? In looking for an answer to the question of how judges interpret statutes, history would always prove to be an appropriate source to start with. The English legal history starts with the defeat of the Saxon king by Norman William the Conqueror in 1066. At that point, law, if any, was transmitted in the form of local customs, informal and merely used for the practical end of enforcing compensation in order to preventing bloodshed. It is largely agreed by historians that William left the laws alone. Nevertheless, gradually local customs gave way to one unified body of laws. In a contest for power with the church's courts and the attempt to centralize power, King Henry II, great-grandson of William, soon after his accession in 1154 sent ...read more.

A corresponding reason is for deference to Parliament's sovereignty. Unsurprisingly, absurd results were produced. In R v Harris, merely because the word 'wound' in the statute was used with the word 'stab' which has a dictionary meaning of 'to pierce or wound with or as if with a pointed weapon', an accused was acquitted on the ground that teeths were not weapons. Zander criticized the literal approach as being 'mechanical, divorced both from the realities of the use of language'. The reason why an issue of statutory interpretation was raised in court was precisely because the words in questions were capable of having two or more meanings. To use the literal approach is to ignore the indeterminancy and ambiguous nature of the english language. The courts subsequently developed a modified version of this approach, the 'golden rule'. As stated by Lord Wensleydale in Becke v Smith( 1836), where the application of the literal approach leads to a manifest absurdity, the judges could adapt the language of the statute in order to produce a sensible outcome. But that appeared to be no different from the literal approach. Both confined interpretation to the four corners of the statute paper. They prioitise what Parliament said over what it may have meant. The question that has always occupied much academic discussion until today is: can we make sense of the various approaches taken practice to statutory interpretation in the English legal system? ...read more.

The contemporary problem is where are the courts to look for evidence in applying the purposive approach to discover the original intention of Parliament? In Pepper v Hart the HOLs decided to allow the courts to refer to Hansard. Lord Mackay, the then Lord Chancellor dissented and claimed that it would be meaningless to do so and it would lead to extra expenses, since lawyers will need to spend time searching the Hansard for ministerial statements. He proved to be correct. The courts subsequently admitted that Hansard proved to be slightest bit helpful and proved time consuming. Whether opening up the range of sources for intertepretation helps or hinders the process of SI is still very much open to question. Hence, the conclusion that can be drawn in response to the question is thus, though there are still conflicting and irresolvable opinions on the specific way judges interpret statutes by, it is safe to assume that the general judicial approach to statutes changes with time. Two centuries ago, the predominant approach is the literal or textualist approach, under which judges bicker about the dictionary meaning of a word in the statute and pretend ignorant to any external contextual information regarding its meaning; contemporarily, while the literal and golden approaches have lost their credibility, judges are more ready to look for meaning of words in statutes by taking a more purposive approach, via the inquisition of external evidence. ...read more.