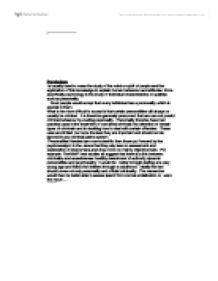 Is Sex is commonly used to describe the innate biological characteristics of humans constituting their femaleness or maleness?

Liberal feminism views women as an equal part of society. It centers on rights and non-discrimination. Criminology much of the work of this group has been associated with a study of the discriminatory practices of the criminal justice system, whether these be in favour of or more likely against women. Socialist feminism is interested in the effects of both patriarchy and capitalism on criminality. Cultural feminism explores and often celebrates differences between men and women. It is interest in women's culture and socializing qualities. Post-modern feminism celebrates difference in distinctive way. Its intention is to give voice to any element that may have been silenced in the past. Being woman-centred and stressing the importance of gender is social structures and relations are at least two importance key components. As far as criminology is concerned there are if anything greater problems. Morris seek to define a canon work which has certain core feature although in a later account they suggest a diversity of perspectives. While Smart doubts the possibility and the validity of such enterprise, simply mixing feminism into criminology. ...read more.

The offender supposedly lacks the intelligence to comprehend the law or to control his own behaviour. The nonofender is seem as intelligent enough to understand the law an control very low levels of intelligence may not engage in crime or because they are unable to recognize an opportunity for crime. The emphasis of this approach is on intelligence usually measured by IQ test rather than on the whole personality of an individual. The inadequancy of these test is one reason to view with some scepticism the conclusions of research on intelligence and criminality. Anyway theories they are more commonly based upon empricl research which can be more easily assumed. Most of them assume that each individual has a central or core personality which can explain reactions to most stimuli and will determine the likelihood of becoming criminally involved. However different theories link different personality types to criminality, which means difficult to choose between them. The criminal justice system expects them to determine the responsibility of individual so that the court can better decide how to punish while the system, society and the offender all want the offenders behaviour to alter so as not to include criminality in the future. ...read more.