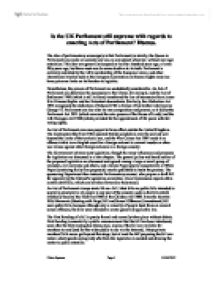 Is the UK Parliament still supreme with regards to enacting Acts of Parliament? Discuss.

Is the UK Parliament still supreme with regards to enacting Acts of Parliament? Discuss. The idea of parliamentary sovereignty is that Parliament (or strictly, the Queen in Parliament) can make or unmake any law on any subject whatever, without any legal restriction. This idea was generally accepted as reality a hundred years ago, or even fifty years ago, but there must now be some doubt as to its truth. Parliament is certainly restricted by the UK's membership of the European Union, and other international treaties such as the European Convention on Human Rights may also have put some limits on its freedom to legislate. Nevertheless, the powers of Parliament are undoubtedly considerable. An Act of Parliament can determine the succession to the Crown, for example, and the Act of Settlement 1700 (which is still in force) transferred the line of succession from James II to Princess Sophia and her Protestant descendants. Similarly, the Abdication Act 1936 recognised the abdication of Edward VIII in favour of his brother who became George VI. Parliament can also alter its own composition and powers, as it did by the Parliament Act 1911 (which removed the veto powers of the House of Lords) ...read more.

When a bill has been passed in identical terms in both Houses, it is presented for the royal assent, when Commissioners acting for the Queen indicate her approval of the proposal by the Norman French phrase "La Reyne le veult" (the Queen wishes it). If the Queen wished to signify disapproval, the tactful phrase would be "La Reyne s'avisera" (the Queen will consider it), but the royal assent has never been refused to any bill passed by both Houses since 1704 (when Queen Anne refused her assent to the Scottish Militia Bill), and most constitutional lawyers now believe that in any but the most extraordinary circumstances the sovereign is bound to assent. Without any doubt, the greatest limitations on Parliamentary sovereignty now arise from membership of the European Union. There is room for debate as to whether this is a good or a bad thing, and/or whether the advantages of membership outweigh the perceived disadvantage of lost sovereignty, but any sensible person must surely admit that Parliamentary sovereignty has been curtailed. There are three main ways in which this is evident. First, there is now an external body (or bodies, perhaps) ...read more.

Campbell & Fell v United Kingdom (1984) 7 EHRR 165, ECHR A number of prisoners involved in a prison riot were charged with disciplinary offences under the Prison Rules, and were sentenced by the Board of Visitors to a substantial loss of remission. No legal representation was permitted at the disciplinary hearing, and subsequent consultations with the prisoners' solicitors took place in the presence of a prison officer. The Court said this was in breach of Art.6, guaranteeing the right to a fair trial. The Government subsequently changed the Prison Rules to allow legal representation in cases where the prison authorities could impose a substantial loss of remission. A further limitation of Parliamentary sovereignty, some might say, is the use of referenda to decide major constitutional issues. The first national referendum in 1974 asked whether the United Kingdom should remain in the European Community, and the Labour Party have all but promised a referendum on the single currency within the next five years. (In between times, there have been devolution referendums in Wales and Scotland.) Although Parliament retains the right to decide when and on what issue a referendum is to be held, and could in theory ignore the result, the reality is that there is a temporary transfer of power from parliament to the populace at large Claire Spencer Page 1 10/05/2007 ...read more.