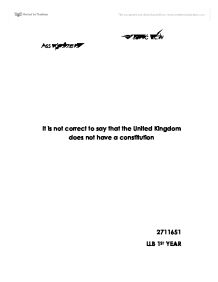 Public Law Assignment It is not correct to say that the United Kingdom does not have a constitution 2711651 LLB 1ST YEAR The constitution of a country is a set of rules regulating the powers of its government and the rights and duties of its citizens. Almost all countries in this world has its own constitution and it could be in different in forms. In general, Constitution is the fundamental law of the state. It contains the principles upon which the government is founded and regulating the divisions of the sovereign powers, directing to what persons each of these powers is to be confided. It also concerns with how powers are divided between different institutions of government or regionally. Therefore, a constitution might be considered as managing disagreement. Many writers has given different notions while tried to give a proper definition of a constitution. As Sir John Laws (1996) pointed out that, a constitution is set of rules which govern the relationship between in a state between ruler and the ruled (alder, p.6). ...read more.

On the other hand, in presidential system there is split between the legislature and executive and there are separately chosen. Constitution purpose is to constitute rules about what the structure of government should be and what powers it may and may not exercise. W.F. Murphy states that constitution is guardian of fundamental rights ( Allen and Thompson, p.10). It protects people right and let people freely choose their representatives. Moreover, V. Bogdanor (1988) states that the first aim of constitute is to protect people from government, from the danger of a tyranny of the majority in the legislature and the second aim was to protect the people from themselves (Allen and Thompson, p.12).The presence of entrenchment or the lack of entrenchment is a fundamental feature of constitutions. Entrenchment refers to whether the constitution is legally protected from alteration without a procedure of constitutional amendment. United States constitution would be better example of entrenchment constitution. On the other hand, United Kingdom constitution is not entrenched. ...read more.

The two most important principles were identified by the constitutional lawyer, A.V. Dicey as the twin pillars of the constitution which are Parliamentary sovereignty and Rule of law (www.justice.org.uk). The most recent key principle is European Union membership, the principle that EU law takes precedence over UK law. Moreover, other important principles are Unitary state, Parliamentary government and constitutional monarchy, European Union membership. There are other sources of United Kingdom constitution and much of them can be found in written documents or statutes such as Magna Carta, the Bill of Rights, the Act of Settlement and the Parliament Acts (The Daily telegraph, 2008). Therefore, we can say that United Kingdom does have a constitution. The Constitution is very important because it defines the main outlines of how the state is ruled, the fundamental rights of the citizens, and also defines that the state is a Democracy for example. This makes it the most important of all the laws in a state. ...read more.