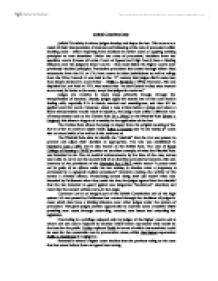 Judicial Creativity Essay Judicial Creativity is where judges develop and shape the law. This occurs as a result of their interpretation of statutes and following of the rule of precedent whilst deciding cases - either departing from decisions in earlier cases or applying existing principles to new situations. Under the rules of precedent, decisions from the appellate courts (House of Lords, Court of Appeal and High Court) have a binding influence over the judges in lower courts - they must follow the higher courts over previously decided principles. Persuasive precedent also exists through obiter dicta statements from the HL or CA, from courts in other jurisdictions as well as rulings from the Privy Council. It was held in the 19th century that judges didn't make law; they simply declared it. (Lord Esher - Willis v. Baddeley [1892]) However, this was dispelled by Lord Reid in 1972, who stated that "we don't believe in fairy tales anymore so we must, for better or for worse, accept that judges do create law" Judges are creative in many ways, primarily though, through the interpretation of statutes. Usually, judges apply the statute law to the case they're dealing with, especially if it is clearly worded and unambiguous, and then it'd be applied word for word. ...read more.

This gives judges another opportunity to exercise some creativity whilst presiding over cases through: overruling, reversal, new issues and extending the legislation. Overruling is a privilege enjoyed only by judges of the higher courts and is where and old case is replaced by another which better represents what would be the best for the public. Holley replaced Smith in terms of which characteristics could be used for the reasonable man in provocation cases, whilst Herrington superseded Addie v. Dumbreck in negligence. Reversal is where a higher court decides that the previous ruling on the case that has come before them on appeal was wrong. The arrival of a case that deals with a completely new concept gives the judge the chance to work on a blank canvas, no precedent exists for such a case and the judge can pass any decision he likes, within reason. Cases which exemplify this are Bland (Severe brain damage), Re. A (conjoined twins) and Gillick (distribution of contraception to underage girls.). All of the above were completely new cases in the English legal system. Despite all of this, there are limitations on what judges can do. ...read more.

Berriman and Clegg emphasise this, the judges didn't apply any further principles that would benefit the greater good. Negligence cases have also seen the neighbour principle applied to numerous new situations instead of overhauling the law to deal with them. It is also argued that judges shouldn't even be involved in decisions on policy which should be left to Parliament, the elected body. The cases of R v. R, Brown and Majewski are all examples of contentious public policy cases. Public policy does influence decisions where there is no legal principle to cover the situation, in these instances judicial activism is welcome and acceptable, so long as the judge makes his decision in accordance with society's views and opinions or else they shouldn't be made at all. Ultimately, the greatest limit on judicial creativity is the personality of the judges themselves. Only the most dynamic are bold enough to make decisions that could arouse controversy; Lords Denning is a perfect example of this, recognising co-habiting partner's rights and equality in divorce law. Despite this, the dangers of too much judicial legislation can be shown through Denning again who often came out with controversial and r****t statements, not what is wanted from a law maker. ?? ?? ?? ?? ...read more.