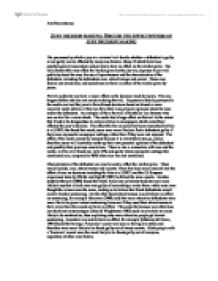 JURY DECISION MAKING: DISCUSS THE EFFECTIVENESS OF JURY DECISION MAKING The processes by which a jury in a criminal trail decide whether a defendant is guilty or not guilty can be affected by many case factors. Many of which have been psychologically researched, and proven to have an effect on the verdict given. The main factors that may affect the verdict given by the jury are; exposure to pre-trial publicity about the case, the use of eyewitnesses and the characteristics of the defendant, including the defendants race, attractiveness and accent. These case factors can sometimes, and sometimes not have an effect of the verdict given by jurors. Pre-trial publicity can have a major effect on the decision made by jurors. This can happen before and also can carry on during the trial. Exposure to details portrayed in the media can lead the juror to form biased decisions based on biased or even incorrect media details or they can form their own personal opinions about the case and/or the defendant. An example of this s the trial of footballer Lee Bowyer who was on trial for a r****t attack. The media had a huge effect on this trail to the extent that it had to be dropped due to certain articles in newspapers which could have affected the jury's decision. ...read more.

Accents to are said to have an effect, for example (Mahoney & Dixon, 1997)found that having a 'brummie' accent was seen as having low status and therefore were more likely to be found guilty out of many accents. Black people with a 'brummie' accent were the most likely to be found guilty out of everyone, regardless of other case factors. Another additional case factor is the use of eyewitness testimony. Research in this field has been dominated by Loftus. Her 1974 study into jury decision making using eyewitnesses the results were as follows: summary one two three No eye witness Evidence from eyewitness, but not challenged Eyewitness evidence, but had poor eyesight 18% 72% 68% % of jurors that found defendant guilty The validity of this experiment can be questioned along with almost every other study involving jury decision making, because practically all use mock setups. The consequences of this are that demand characteristics could affect results. Also the aim of the experiment many also be figured out contributing to this factor. There is also added pressure for the eyewitness evidence to be accepted rather than rejected as the above shows, which all can lead to us questioning the reliability of these studies, and consequently the effectiveness of eyewitness testimony. ...read more.

Check on how others feel * In order to be liked, many people take a position to someone else but a little more extreme Furthermore groupthink can also affect the process of deliberation; this is when it becomes hard for the group to make rational decisions. Symptoms of groupthink include: * Overestimation of the group, including an illusion of invulnerability as well as a firm belief in the inherent morality of the group. * Narrow mindedness, which manifests itself in collective rationalisations and stereotypes of out-groups. * Pressures toward uniformity. This finds expression in self-censorship, an illusion of unanimity, and direct pressure on dissenters. The effects of these factors may be insidious in that group members are not aware of its operation. In conclusion there are many case factors that affect the way a jury comes out with a final verdict, some points such as pre trial media coverage and race seem to dominate the effectiveness of jury decision making, however almost all of it is backed up by studies that are not ecologically valid and so the true effect of these factors cannot be backed up 100%. There are many flaws in jury decision making which has today lead to it being used les and less worldwide. Altaf Korimbocus ...read more.