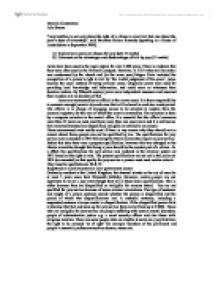 &quot;Jury tradition is not only about the right of a citizen to elect trial but also about the juror's duty of citizenship&quot;, said Baroness Helena Kennedy - explain how jurors are chosen for trial - comment on the advantages and disadvantages of trial by jury.

"Jury tradition is not only about the right of a citizen to elect trail but also about the juror's duty of citizenship", said Baroness Helena Kennedy (speaking in a House of Lords debate in September 2000). A) Explain how jurors are chosen for jury duty 15 marks) B) Comment on the advantages and disadvantages of trial by jury (15 marks) Juries have been used in the legal system for over 1,000 years. There is evidence that they were often used in the Norman Conquest. However, in 1215 when trail by ordeal was condemned by the church and (in the same year) Magna Carta included the recognition of a person's right to trail by 'the lawful judgement of his peers', juries became the usual method of trying criminal cases. ...read more.

The selection is done by a computer selection in the central office. It is essential that the official summons more than 12 jurors as most court have more than one court room and it is not known how many summonsed are disqualified, ineligible or entitled to an excusal. Those summonsed must notify court if there is any reason why they should not or cannot attend. Some people can not be qualified by law. The qualifications for jury service were amended in 1972 following the Morris Committee report on jury service. Before this date there was a property qualification, however this was changed as the Morris committee thought that being a juror should be the counter part of a citizen. As a effect, the qualifications for jury service was widened in the criminal justice act 1972 based on the right to vote. ...read more.

This is either because they are disqualified or ineligible for reasons stated. You are not qualified for jury service because of some criminal convictions. The type of sentence and length of a prison sentence decide whether the person is disqualified and the period of which that disqualifications last. A custodial sentence, including a suspended sentence always results in disqualification. If the disqualified person fails to disclose that fact and turns up for jury service they can be fined up to �5000. Those who are ineligible for jury service are people suffering with certain mental disorders, people of administrative justice e.g. a court security officer and also those with religious vocation. There are some people who are eligible to serve on a jury but have the right to be excused 'as of right' for example members of the parliament and people in essential professions such as doctors, nurses etc. Danielle Constantine Julie Swann ...read more.