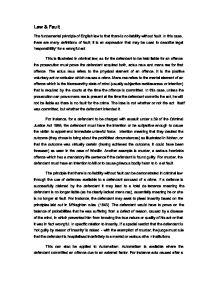 Law and Fault. The fundamental principle of English law is that there is no liability without fault. In this case, there are many definitions of fault; it is an expression that may be used to describe legal responsibility for a wrongful act.

Law & Fault The fundamental principle of English law is that there is no liability without fault. In this case, there are many definitions of fault; it is an expression that may be used to describe legal 'responsibility' for a wrongful act. This is illustrated in criminal law, as for the defendant to be held liable for an offence the prosecution must prove the defendant acquired both, actus reus and mens rea for that offence. The actus reus refers to the physical element of an offence, it is the positive voluntary act or omission which causes a crime. Mens rea refers to the mental element of an offence which is the blameworthy state of mind (usually subjective recklessness or intention) that is required by the courts at the time the offence is committed. In this case, unless the prosecution can prove mens rea is present at the time the defendant commits the act, he will not be liable as there is no fault for the crime. The idea is not whether or not the act itself was committed, but whether the defendant intended it. For instance, for a defendant to be charged with assault under s.39 of the Criminal Justice Act 1988, the defendant must have the intention or be subjective enough to cause the victim to apprehend immediate unlawful force. Intention meaning that they desired the outcome (they chose to bring about the prohibited circumstances) ...read more.

Partial defences to murder stated in the Homicide Act 1957, if claimed successfully, allow a conviction for voluntary manslaughter; meaning a judge may reward a discretionary sentence for murder, as oppose to the mandatory life sentence imposed. The partial defence of diminished responsibility (s.2) and provocation apply to cases where the defendant does not have control over what he or she is doing. What this defence does is recognise that such defendants are less at fault then say 'cold blooded' killers and therefore should be less liable for the consequences of their actions. Under s.3 of the Homicide Act 1957, the defence of provocation requires the proof that the defendant was provoked (need not be illegal i.e. in Doughty a baby crying was suffice), which caused the defendant to lose control and that in the same circumstances the reasonable person would have done the same. There is a requirement for fault in civil law for negligence. Here, in order for a claimant to succeed in action for negligence, they must prove that a duty of care exists, that that duty is breached and that the damage cause was in fact cause by the defendants conduct. If they fail to prove all three elements then the defendant is not at fault and thus is not liable for the offence. ...read more.

Also, health and safety offences (Blake v DPP where selling a lottery ticket to an under 16 was seen as risk to public as encourages underage gambling), social concern cases and common law offences such as parking tickets. However, in the case of Sweet v Parsley, Lord Reid ruled 'where the wording of an act gave no indication as to whether mens rea is required there was a understanding common law...' meaning strict liability is based upon whether the requirement of mens rea is stated in an Act of Parliament. Here, a woman was charged with the management of cannabis as it was used on her property she let out to her students, she hardly stayed there. The courts felt that because the offence she was charged with would have had high social stigma attached, it would be unreasonable to charge her without mens rea. Although strict liability offences are cheaper and less time consuming as there is no need to prove mens rea and it ensures and encourages companies and the public to take extra care. Strict liability cases are morally wrong as it allows innocent individuals to be punished regardless of whether or not they have taken precautions; also that they are ineffective as there is no evidence that others did, in fact take extra care because these offences exist. ...read more.