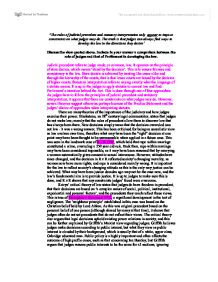 'The rules of judicial precedent and statutory interpretation only appear to impose constraints on what judges may do. The truth is that judges can always find ways to develop the law in the directions they desire' Discuss the view quoted above. Include in your answer a comparison between the role of judges and that of Parliament in developing the law. Judicial precedent refers to judge made, or common, law. It operates on the principle of stare decisis, which means 'stand by the decision'. This is to ensure fairness and consistency in the law. Stare decisis is achieved by treating like cases alike and through the hierarchy of the courts, that is that lower courts are bound by the decision of higher courts. Statutory interpretation refers to saying exactly what the language of a statute means. It is up to the judges to apply statutes to current law and find Parliament's intention behind the Act. This is done through one of four approaches. As judges have to follow the principles of judicial precedent and statutory interpretation, it appears that there are constraints on what judges may do. However, several theories suggest otherwise perhaps because of the Practice Statement and the judges' choice of approaches when interpreting statutes. There are many theories of the importance of the judiciary and how judges exercise their power. ...read more.

Montesquieu believed the law could only be fair when the legislature (Parliament), the executive (cabinet, civil service) and the judiciary (judges) were separate, and did not intertwine. The aim being, that those who created the law would not have any say in how the law was enforced, and so no one group would be in total control of society. However, this has not always been the case in English law, judges do make law. Moreover, the role of Lord Chancellor (now abolished) meant that Lord Woolfe was a speaker in the House of Lords and a senior government minister, and yet headed the judiciary and was responsible for the selection of the judges. The overlap between the powers shows that there are not so many constraints on judges, as if this were so; they would not be law makers. As briefly mentioned, judges, like Parliament have the power to make laws. There are advantages and disadvantages of this. It is a lot quicker to introduce common law than statute law; legislation goes through a long process before coming law. This is important as the law must adapt to the changing needs of society and its morals. Also, as judges are seeing a case unfold before their eyes, they have a greater knowledge of how the law needs to be decided to see that justice is served. ...read more.

Overruling, reversing, distinguishing and the Practice Statement show that judges are often able to develop the law in the direction they desire, and that constraints can be overcome with these tools. However, it must not be forgotten that judges are subservient to Parliament and this can be considered to be the biggest constraint the judiciary face. Parliament must remain supreme, as they were democratically elected, judges were not. It can be said that even though Parliament was elected, they are often not personally responsible for the creation of law, as seen through the issue of delegated legislation. The delegation was not elected either, but there appear to be no qualms about law being created in that way. Also, judges can easily remain subservient to Parliament while choosing the direction to follow, for example, judges choose which approach to use in statutory interpretation, and this is what decides the outcome in all cases. As different approaches may have a different outcome in the same case, the judges role is highlighted here, as ultimately it is in their hands what the result will be. To conclude, the statement that judicial precedent and statutory interpretation only appear to impose constraints on what judges may do is true. Although the rules of both are clear cut, there is room for judicial creativity that can achieve the aims of both while also reaching justice. Parliament remains supreme, and although this may seem an even bigger constraint, the just decisions judges have been able to achieve in landmark cases suggest otherwise. ...read more.