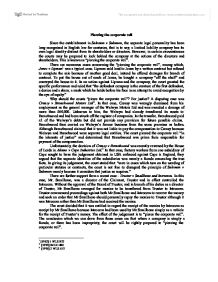 Piercing the corporate veil Since the establishment in Salomon v Salomon, the separate legal personality has been long recognised in English law for centuries, that is to say, a limited liability company has its own legal identity distinct from its shareholders or directors. However, in certain circumstances the courts may be prepared to look behind the company at the actions of the directors and shareholders. This is known as "piercing the corporate veil". There are numerous cases concerning the "piercing the corporate veil", among which, Jones v Lipman1 was a typical case. Lipman sold land to Jones by a written contract but refused to complete the sale because of another good deal, instead he offered damages for breach of contract. ...read more.

Unknown to him, the Welwyn had already transferred its assets to Breachwood and had been struck off the register of companies. In the transfer, Breachwood paid all of the Welwyn's debts but did not provide any provision for future possible claims. Breachwood then carried on Welwyn's former business from the same premises as before. Although Breachwood claimed that it was not liable to pay the compensation to Creasy because Welwyn and Breachwood were separate legal entities. The court pierced the corporate veil "in the interests of justice" and determined that Breachwood was prima facie responsible for payment of the compensation. Unfortunately, the decision of Creasy v Breachwood was recently reversed by the House of Lords in Adams v Cape Industries Ltd.3 In that case, factory workers from one subsidiary ...read more.

Trustor commenced proceedings against both Mr Smallbone and Introcom to recover the money and seek an order that Mr Smallbone should personally repay the monies to Trustor although it was Introcom rather than Mr Smallbone had received the monies. The court decided that it was entitled to regard the receipt of the monies by Introcom as receipt by Mr Smallbone because Introcom had been used by Mr Smallbone simply as a vehicle for the receipt of Trustor's money. The effect of the judgement is to "pierce the corporate veil". The conclusion which we can draw from those cases are that where a company is simply a facade, or there has been impropriety, the court will be rightly prepared to "piercing the corporate veil". 1 [1962] 1 WLR 832 2 [1993] BCLC 480 3 [1990] 2 WLR 657 ...read more.