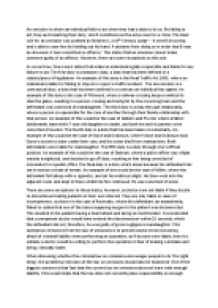 'Law should encourage citizens in their civic duty to do &quot;the right thing&quot; in a moral sense and not turn a blind eye or fail to act to help someone who is in need.' Consider to what extent the criminal law relating to omissions reflects this.

﻿An omission is where an individual fails to act when they had a duty to do so. By failing to act, they are breaching their duty, which constitutes as the actus reus for a crime. The basic rule for an omission was outlined by Stephen J, a 19th Century Judge ? ?A sees B drowning and is able to save him by holding out his hand. A abstains from doing so in order that B may be drowned. A has committed no offence.? This states that an omission cannot make someone guilty of an offence. However, there are some exceptions to this rule. In current law, there are 6 duties that make an individual legally responsible and liable for any failure to act. The first duty is a statutory duty, a duty that has been defined in a statute/piece of legislation. An example of this duty is the Road Traffic Act 1988, where an individual is liable for failing to stop at or report a traffic accident. The second duty is a contractual duty, a duty that has been outlined in a contract an individual has signed. An example of this duty is the case of Pittwood, where a railway-crossing keeper omitted to shut the gates, resulting in a person crossing and being hit by the oncoming train and the defendant was convicted of manslaughter. The third duty is a duty through relationship, where a person is responsible for the care of another through their family relationship with that person. ...read more.

Essentially, a child had died and neither the mother nor the father were liable for the death. Clearly, criminal liability was not wide enough at the time to ensure that people who are given a responsibility are liable. However, this case was in 1973 and the courts in modern times may not give a similar verdict. Another problem with the law on omissions is that, in some cases, many people can be liable. Whilst this may not be justifiable, it certainly shows that criminal liability is wide enough to ensure that people responsible are held liable. An example of this would be the case of Evans, where the defendant supplied her half-sister with heroin, who later overdosed and died. The attempts by the defendant and the mother of the defendant and victim were not enough to be considered as fulfilling their duties, as they merely put the victim to bed and hoped she would get better. The defendant appealed, arguing that she did not have a duty of care. However, the Court of Appeal upheld that she had set up a state of affairs where she did owe a duty of care to the victim, as she ought reasonable to have known she was threatening the life of her half-sister. As this case was in 2009, clearly the current law is wide enough to make multiple people liable for the same crime when they each have different duties, showing how the current law on omissions does encourage citizens to do ?the right thing?. ...read more.

Because of this, it could be argued that the law does not need to encourage citizens to do ?the right thing?, as it is almost common sense to aid an injured person. A Good Samaritan law would only enforce a socialist ideal upon the entire population, which is certainly unfair, as it assumes that society is a collective, who are each responsible for the livelihoods of each other. The enactment of this law could very well be the first step in creating a society where individuals are controlled and legally responsible to perform certain actions at the will of the Government, and have no free will. To conclude, it is obvious that the current law on omissions is certainly capable of encouraging citizens to do ?the right thing? and certainly does so. The case of Airedale NHS Trust v Bland also shows how this can be interpreted and applied differently. The current law places responsibility on all who are even slightly responsible to perform a duty and punishes them for not fulfilling their duty, encouraging them to do ?the right thing? and perform their duty. It could be argued that the law does not encourage citizens to do ?the right thing?, but only if you interpret that phrase so as to mean helping anyone and everyone, which would be quite radical. However, this would be nigh on impossible to implement and apply, and could actually encourage citizens to do the incorrect thing and put themselves at risk of harm, both through their own actions and through others. ...read more.