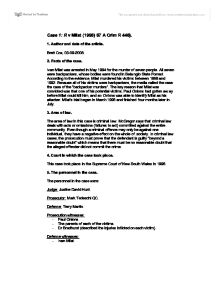 Case 1: R v Milat (1996) 87 A Crim R 446). 1. Author and date of the article. Brett c*x, 03-09-2008. 2. Facts of the case. Ivan Milat was arrested in May 1994 for the murder of seven people. All seven were backpackers, whose bodies were found in Belanglo State Forrest. According to the evidence, Milat murdered his victims between 1989 and 1992. Because all of his victims were backpackers, the media called the case the case of the "backpacker murders". The key reason that Milat was convicted was that one of his potential victims, Paul Onions had gotten away before Milat could kill him, and so Onions was able to identify Milat as his attacker. Milat's trial began in March 1996 and finished four months later in July. 3. Area of law. The area of law in this case is criminal law. McGregor says that criminal law deals with acts or omissions (failures to act) committed against the entire community. Even though a criminal offence may only be against one individual, they have a negative effect on the whole of society. In criminal law cases, the prosecution must prove that the defendant is guilty "beyond a reasonable doubt" which means that there must be no reasonable doubt that the alleged offender did not commit the crime. ...read more.

Because of this he argued that his common law right to legal representation had been breached. This right was established in Dietrich v The Queen, and Milat relied on this case in his appeal. However, his appeal was dismissed by the court because they said that Milat could only be successful if the quality of his legal representation was so low that he would have been better off without it. The court said that the quality of legal representation provided by Milat's defence lawyer Terry Martin's was adequate. 2. Appeal to the High Court of Australia in 2004. Milat appealed this time on the grounds that the first judge, Justice Hunt, had let the prosecution put a case to the jury which was not supported by its own witness. This appeal was also dismissed, with Justice McHugh saying that the appeal was brought out of time. Even though Milat still claims that he is innocent, he has never appealed on that ground. This could be because of the amount of evidence against Milat that suggests that he did murder the seven people found in the forest. As Justice McClelland said, "the material provided by the applicant does not raise a doubt or question about his guilt". In the article by Brett c*x, it also states that "there is overwhelming evidence that Milat was the murderer, and they are the simple facts of the case". ...read more.

In the trial, Justice Heydon even asked the question, "how can the birth of a healthy child, or any child for that matter, be considered an injury rather than a blessing?". In the article by Virginia Bourke, Justice Heydon is also quoted as saying "human life is invaluable in the sense that it is incapable of valuation". I do not think that it is fair for the child to grow up knowing that he was unwanted. However, one of the judges in the majority, Justice Kirby said that "it is difficult to accept that children in today's age learning such facts would not realise, if explained to them, that the claim was brought simply for the economic consequences of medical negligence". Even if this is true, I still think that the outcome of this case was unjust. Students at university who are studying medicine may even decide that they do not want to specialise in fertility because of the risk that they will be sued like Dr Cattanach. 8. Whether there will be an appeal. As already mentioned, this case was first heard in the Supreme Court of Queensland. The defendant, Dr Cattanach then appealed to the High Court of Australia, where his appeal was dismissed. No further appeals can be made by Dr Cattanach because the High Court is the last court of appeal. Once an appeal is dismissed from the High Court, the case is completely finished. ...read more.