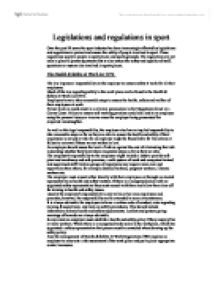 Legislations and regulations in sport

Legislations and regulations in sport Over the past 30 years the sport industry has been increasingly effected by legislations and regulations to protect and ensure the safety of people involved in sport. These regulations apply to people in sport places and sports grounds. The regulations are not only in place to protect sportsmen but to also ensure the safety and equality of staff, spectators or anyone else involved in sports places. The Health & Safety At Work Act 1974. The law imposes a responsibility on the employer to ensure safety at work for all their employees. Much of the law regarding safety in the work place can be found in the Health & Safety At Work Act 1974. Employers have to take reasonable steps to ensure the health, safety and welfare of their employees at work. Failure to do so could result in a criminal prosecution in the Magistrates Court or a Crown Court. Failure to ensure safe working practises could also lead to an employee suing for personal injury or in some cases the employer being prosecuted for corporate manslaughter. As well as this legal responsibility, the employer also has an implied responsibility to take reasonable steps as far as they are able to ensure the health and safety of their employees is not put at risk. So an employer might be found liable for his actions or failure to act even if these are not written in law. An employer should assess the level of risk as against the cost of eliminating that risk in deciding whether they have taken reasonable steps as far as they are able. ...read more.

in Northern Ireland in 1996. The Children Act 1989 - the court must have regard in particular to :- the ascertainable wishes and feelings of the child concerned (considered in the light of his age and understanding) his physical, emotional and educational needs the likely effect of any change in his circumstances his age, s*x, background and any characteristics of his which the court considers relevant any harm which he has suffered or is at risk of suffering how capable each of his parents, and any other person in relation to whom the court considers the question to be relevant, is of meeting his needs the range of powers available to the court under this Act in the proceedings in question. The disability discrimination act 1995 The Disability Discrimination Act (DDA) aims to end the discrimination which many disabled people face. This Act gives disabled people rights in the areas of: employment access to goods, facilities and services buying or renting land or property. The employment rights and first rights of access came into force on 2 December, 1996; further rights of access came into force on 1 October, 1999; and the final rights of access will come into force in October 2004. In addition this Act: allows the Government to set minimum standards so that disabled people can use public transport easily. Disability Discrimination Act Part I - Definition of disability The Act defines a disabled person as someone with "a physical or mental impairment which has a substantial and long-term adverse effect on his ability to carry out normal day-to-day activities." ...read more.

The Food Safety Act 1990 act requires and the information contained here applies to everyone involved in supplying food for sale for human consumption. There are a number of sources of expert advice on the Food Safety Act 1990. The Environmental Health or Trading Standards Departments of your local authority should normally be your first port of call. Section 40 of the Food Safety Act 1990 permits Ministers to issue Codes of Practice to food enforcement authorities concerning the execution and enforcement of the Act and subordinate legislation made under it. This provision was not altered by the Food Standards Act 1999. The Codes set out instructions and criteria to which the authority should have regard when engaged in the enforcement of food law and are intended to achieve more even standards of enforcement by food authorities. There are currently 20 separate Codes of Practice issued under Section 40. The majority of the Codes were issued in 1991 following the introduction of the Act. Additional Codes were published in the mid -1990s to coincide with implementation of EU Product Specific Hygiene Regulations. Only a few of the Codes have been revised since they were first published. A complete review of all the Codes was agreed in 1999 because some Codes: * Had become out of date (eg containing guidance on amended, repealed or replaced regulations) and conflicted with best practice; * No longer reflected local authority structures (eg following the creation of unitary authorities); * Pre-dated the wider role of LACORS to embrace food hygiene and safety co-ordination, and the development of the home authority principle and similar co-ordination initiatives. The Codes also need to be amended to reflect the role of the FSA's Framework Agreement with local authorities which came into force on 1 April 2001. ...read more.