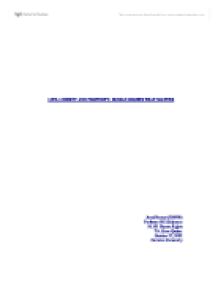 LIFE, LIBERTY AND PROPERTY: HUMAN RIGHTS THAT MATTER Jared Berney (329338) Professor Bill Skidmore 56.101 Human Rights TA: Sima Qadeer October 27, 2002 Carleton University LIFE, LIBERTY AND PROPERTY: HUMAN RIGHTS THAT MATTER When Jack Donnelly said "Human rights are a social practice that aims to realize a particular vision of human dignity and potential by institutionalizing basic rights...." I immediately realized that to achieve this, the rights of life (race, religion, and gender), liberty and property are most vital. They are the most important rights in order to attain the aforementioned dignity in that they are the rights that touch our individual lives the most often and consistently. These three main rights, which make up our Human Rights Code, cover a variety of different areas dealing with human rights but are also able to fuse what really matters to human beings. Throughout the course of this essay, the importance of each right will discussed, as well as the effect they have on all of our lives. Human rights are political and personal rights that prohibit arbitrary punishments and entitle each person to matter equally (regardless of race, religion and gender).1 Race matters to all human beings because everyone should have the right to be treated equally in spite of skin color. ...read more.

For someone not to be able to experience any different aspects of life would not only cheat themselves out of important life practices, but also cheat other people into believing what kind of person you really are (as others wouldn't be able to get a clear grasp on your personality). The freedom from arbitrary arrest and confinement is not only significant when dealing with law but also useful when dealing with human rights. The fact that law enforcement and other authoritarians are not permitted to force an arrest upon a person with no apparent grounds is advantageous in protecting citizens from feeling inferior and being treated on a lesser level to the enforcement. Human rights are about fairness3, and the shame a person feels when law enforcement becomes involved in their life is immense. Therefore, it is crucial that there be a level of trust in knowing that you won't be taken into custody for any unfair reason. Along with the law enforcement getting involved, a police officer makes a person feel second-rate which affects their self-importance and the trust they have for the legal system as a whole. If such a human right was not in effect, there would be many violations to all kinds of civilians, leading to eventual distrust of the legal system (which defeats its purpose). ...read more.