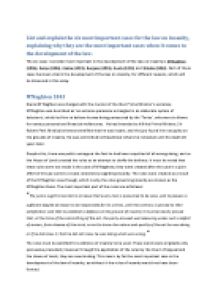 ﻿List and explain the six most important cases for the law on insanity, explaining why they are the most important cases when it comes to the development of the law. The six cases I consider most important in the development of the law on insanity is M?Naghten (1956), Kemp (1956), Clarke (1972), Burgess (1991), Quick (1973) and Windle (1952). Each of these cases has been vital in the development of the law on insanity, for different reasons, which will be discussed in this essay. M?Naghten 1843 Daniel M?Naghten was charged with the murder of the then Prime Minister?s secretary. M?Naghten was described as ?an extreme paranoiac entangled in an elaborate system of delusions?, which led him to believe he was being persecuted by the ?Tories?, who were to blame for various personal and financial misfortunes. He had intended to kill the Prime Minister, Sir Robert Peel. Medical witnesses testified that he was insane, and the jury found him not guilty on the grounds of insanity. He was committed to Broadmoor where he remained until his death 20 years later. Despite this, there was public outrage at the fact he had been acquitted of all wrong-doing, and so the House of Lords created the rules as an attempt to clarify the defence. It must be noted that these rules were not made in the case of M?Naghten; they were created after the case in a joint effort of 14 Law Lords to create consistency regarding insanity. The rules were created as a result of the M?Naghten case though, which is why the rules governing insanity are known as the M?Naghten Rules. ...read more.

However, Lord Ackner held that ?The rules apply only to persons who by reason of a ?disease of the mind? are deprived of the power of reasoning. They do not apply and never have applied to those who retain the power of reasoning, but who in moments of confusion or absent-mindedness fail to use their powers to the full? Therefore, Clarke decided the definition of ?defect of reason? was where a person had lost their power of reasoning. In Clarke, she had only failed to use her power of reasoning. Someone in an epileptic fit cannot just snap out of it and think rationally, they are unconscious and will remain unconscious until their body stops. Clarke could have begun thinking rationally at any time, but had just failed to do so. Therefore the case of Clarke is one of the most important cases in the development of insanity, as it defined what a defect of reason is, and allowed people that had acted without mens rea due to absent mindedness be acquitted, as Clarke was. Quick (1973) Previous to 1973, the Courts used the continuing danger theory to determine whether or not something was or wasn?t a disease of the mind. The continuing danger theory was first explained by Lord Denning in Bratty v Attorney General of Northern Ireland who said that ?any mental disorder which has manifested itself and is prone to recur is a disease of the mind?. The external danger theory was designed to complement the continuing danger theory. ...read more.

This is so even if the defendant is suffering from delusions which cause him to think his act is morally right. The decision in Windle created a precedent, that was later followed by Johnson (2007), where the defendant knew his act was legally wrong, but morally right. The judge did not allow the defence of insanity to go to the jury, despite he thought that his act was morally right, because the precedent made by Windle said that it only matters if the defendant knows his act was legally wrong. Therefore the case of Windle is important, as it defined what ?wrong? meant; that the defendant must not know his act was legally wrong to be able to use the defence of insanity. This precedent has been used in a number of cases since then. Conclusion In conclusion, the most important case is the case of M?Naghten, as it created the rules that govern the defence of insanity. The cases of Clarke, Kemp and Windle are all important in defining what each of the elements of the M?Naghten rules mean. Burgess is important as it operates in a grey area of the rules, where neither the decision of Parks or Burgess is wrong, even though they are conflicting ideas. It is also important as sleepwalking is a relatively common ?disease?. Finally, Quick is important as it says that a person whose automatic state was caused by an external cause may use the defence of non-insane automatism, even if the underlying cause was a ?disease of the mind?. ...read more.