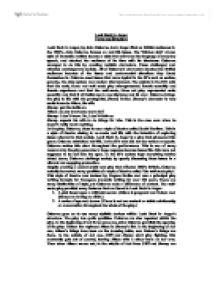 Look Back In Anger - Form and Structure

Look Back In Anger Form and Structure Look Back In Anger, by John Osborne, had a huge affect on British audiences in the 1950's. John Osborne focuses on real life issues. The 'kitchen sink' drama style of Domestic realism became a style that mirrored the language of everyday speech, and shocked the audience of its time with its bluntness. Osborne managed to do this by creating realistic characters. These challenged and attacked contemporary society. All of Osborne's characters shocked the British audiences because of the issues and controversial situations they found themselves in. Osborne used issues that were topical in the 50's such as sexism, poverty, the class system and nuclear disarmament. The debate in the 50's said that the male, three -act well made play misrepresented female sexuality and female experience and that the well-made, three act play represented male sexuality and that it all builds up to one big bang and its over. ...read more.

(Alison is pregnant and Helena and Jimmy are having an affair.) 2. A series of ups and downs. (There is not one mutual or stable relationship or conversation throughout the whole of the play.) Osborne goes on to use many stylistic devices within Look Back in Anger's structure. The play has cyclic qualities. Patterns are also repeated within the play. In the beginning of act three scene one, John Osborne parallels the opening of the play. Helena has replaced Alison in Jimmy's flat. In the beginning of Act one, Alison's things have been on the dressing table, now Helena's things are there. In the middle of Act one, Cliff and Jimmy start play fighting, this eventually gets out of control, leaving Alison with a minor burn on her arm. Then when Alison moves out, in the middle of Act three Cliff and Jimmy are having a similar play fight where they fall near Helena but she does not get burned. ...read more.

The monologue was towards the end of Act two scene two. I found I had to be very sarcastic when Helena hands him a letter from Alison. Jimmy: "Oh, its one of these, is it? Did you write this for her? Well listen to this then." Osborne uses Jimmy's sarcasm to maintain the audiences attention. The audience are aware of Jimmy's dominant force of personality by his repeated use of monologues. He repeatedly asserts authority within the play structure. He drives the action along and monopolises speech. If I were to perform this play, I would make it as realistic as I could, following Constanin Stanislavski's method acting. Before the realistic drama of the late 1800s, no one had devised a method for achieving this kind of believability. Through their own talent and genius, individual actresses and actors had achieved it, but no one had developed a system whereby it could be taught and passed on to future generations. Although John Osborne did use the style of Stanislavski he interpreted it to his own unique style of play and he has done this to his full potential. By Kiera Brown ...read more.