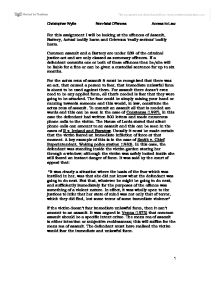 For this assignment I will be looking at the offences of Assault, Battery, Actual bodily harm and Grievous 'really serious' bodily harm. Common assault and a Battery are under S39 of the criminal justice act and are only classed as summary offences. If a defendant commits one or both of these offences then he/she will be liable for a fine or can be given a custodial sentence for up to six months. For the actus reus of assault it must be recognized that there was an act, that caused a person to fear, that immediate unlawful force is about to be used against them. For assault there doesn't even need to be any applied force, all that's needed is fear that they were going to be attacked. The fear could be simply raising your hand or running towards someone and this would, in law, constitute the actus reus of assault. To commit an assault all that is needed are words and this can be seen in the case of Constanza (1997). In this case the defendant had written 800 letters and made numerous phone calls to the victim. The House of Lords stated that silent phone calls can amount to an assault and this can be seen in the cases of R v. Ireland and Burstow. Usually it must be made certain that the victim feared an immediate infliction of force at that moment. ...read more.

Firstly I am going to look at the actus reus of the offence. When committing this offence, the defendant must have committed an assault or a Battery. The first necessity is therefore, to prove the actus reus of an assault or a Battery. Then the prosecution must then prove whether or not the assault and/or Battery caused ABH. In the case of Ann and Ben, the attack was more than a simple assault or Battery. In Miller (1954) the court stated: 'Actual bodily harm includes hurt or injury calculated to interfere with health or comfort. It was also accepted that ABH included not just physical harm, but also psychological injury will only count as ABH; if it is a clinically recognisable condition. "The defendant, in R vs. Chan-f**k aggressively questioned a man who he suspected of sealing his fianc�e's jewellery. He then dragged him up stairs and locked him in to a room. The victim by this point was frightened of what the defendant would do on his return. The victim soon after attempted to escape through the window, but injured himself when he fell to the ground". "The defendant went in to a local pub, where she spotted her husband's new girlfriend having a drink with some friends. She went up to the table where the group were sitting, intending to throw a pint over the woman. On reaching the table, she said 'Nice to meet you darling' and threw the beer but, as she did so, she accidentally let go of the glass, which cut the woman's wrist. ...read more.

For behaving in this way he was charged with inflicting GBH under S.20 of the offences against the person act 1861. On appeal of his conviction the defendant argued that the requirements of the term 'cause' had not been satisfied. The court of appeal and House of Lords dismissed the appeal. The HL stated that: Section 20 could be committed where no physical force had been applied (directly or indirectly) on the body of the victim. I am now going to look at the mens rea of the offence. The mens rea for this offence is defined under the word 'maliciously'. In Cunningham it was stated that for the purpose of the 1861 Act maliciously meant 'intentionally or recklessly' and reckless is used with a subjective meaning. In the case of Mowatt (1967) established that there is no need to intend or be reckless as to cause GBH or wounding. The defendant does only need to intend, to be reckless or his or her acts could have caused some physical harm. As Lord Diplock said: "it is quite unnecessary that the accused should have foreseen that his unlawful act might cause physical harm of the gravity described in this section, i.e. wound or some physical injury. It is enough that he should have foreseen that some physical harm to some person, albeit of a minor character might result." This can be seen in the case of DPP v Parmenter (1992). To conclude Ann should be convicted of a section 20 offence because. ?? ?? ?? ?? Christopher Wylie Non-fatal Offences Access to Law 1 ...read more.