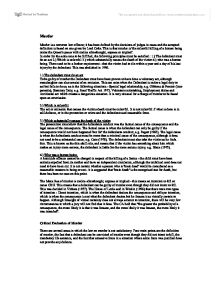 Murder Murder is a common law offence; it has been defined by the decisions of judges in cases and the accepted definition is based on one given by Lord Coke. This is that murder is 'the unlawful killing of a human being under the Queen's peace with malice aforethought, express or implied'. In order for the actus reus to be fulfilled, the following principles must be satisfied : 1.) The defendant must do an act 2.) Which is unlawful 3.) which substantially causes the death of the victim 4.) who was a human being. There used to be a further requirement - that the victim had to die within a year and a day of his last injury by the defendant. This was abolished in 1996. 1.) The defendant must do an act To be guilty of murder the Defendant must have been proven to have done a voluntary act, although manslaughter can also consist of an omission. This can arise when the Defendant is under a legal duty to act but fails to do so, as in the following situations - Special legal relationship, e.g. Gibbons & Proctor (loco parentis), Statutory Duty, e.g. Road Traffic Act 1972, Voluntary undertaking, Employment duties and Accidental act which creates a dangerious situation. ...read more.

Although foresight of virtual certainty does not always amount to intention, there will be very few circumstances in which a jury will not find that it does. The CA held that "the greater the probability of a consequence, the more likely it is that it was forseen, and the more likely it was forseen, the more likely it was intended". Critical Evaluation of Murder There are several areas in which the law on murder is not satisfactory. Four main points are the definition of murder, the fact that a defendant can be convicted of murder even though they did not intent to kill, the mandatory life sentence, and the fact that excessive force in a situation where some force was justified does not provide any defence. Some people may argue that the definition of murder is out of date as it was established in 1797, and should be repaced by a modern statutory definition in modern language - for example, 'malice aforethought' could become 'intention'. At the beginning of its report on partial defences to murder (law com 290 2004) the Law Commission said expressly that it "has long considered that the law of murder is in need of review". On the other hand, it could be argued that the current definition, despite being old, is effective as it has worked for over 200 years. ...read more.

or use excessive force in self-defence (Tony Martin). The mandatory sentence is also seen to be inadequate, because most murderers are released after 20 years or less. Many people think that life should mean life - whether it is life imprisonment or death - as this is true retribution. However, it could be seen as inhumane as it goes against the idea of rehabilitation. The House of Lords Select Committee Murder and Life Imprisonment (1989) recommended the abolition of the mandatory sentence for murder, as did an independent committee chaired by Lord Lane, the former Lord Chief Justice, in 1993. The abolition would mean that the sentence would then be at the discretion of the judge, perhaps assisted by the jury classifying the offence in order of seriousness. As long as the only sentence for murder is the mandatory life sentence, it could be argued that justice can't really be acheived. If a defendant can show that they used reasonable force in self defence or prevention of crime in doing the killing, they are not guilty of murder. However, when the defendant uses excessive force in the circumstances, they are guilty of murder. This 'all or nothing' effect on the defence is seen as being too harsh as the defendant in either acquitted or given a life sentence. Some people argue that if the defendants only 'fault' is that they used more force than was reasonable, a life sentence is not justified. ...read more.

A thoughtful and well researched essay.

Further reference could be made to, amongst other things, proposed amendments including the "tiered" offence structure (like in place in the US), and the distinction between voluntary and involuntary manslaughter.