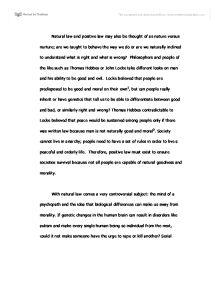 Natural law and positive law may also be thought of as nature versus nurture; are we taught to behave the way we do or are we naturally inclined to understand what is right and what is wrong?

Natural law and positive law may also be thought of as nature versus nurture; are we taught to behave the way we do or are we naturally inclined to understand what is right and what is wrong? Philosophers and people of the like such as Thomas Hobbes or John Locke take different looks on man and his ability to be good and evil. Locke believed that people are predisposed to be good and moral on their own1, but can people really inherit or have genetics that tell us to be able to differentiate between good and bad, or similarly right and wrong? Thomas Hobbes contradictable to Locke believed that peace would be sustained among people only if there was written law because man is not naturally good and moral2. Society cannot live in anarchy; people need to have a set of rules in order to live a peaceful and orderly life. Therefore, positive law must exist to ensure societies survival because not all people are capable of natural goodness and morality. ...read more.

This is why a set of positive laws is absolutely crucial to society. If you look at children and teenagers for example, some as they grow older tend to push the limits more and more. Whether it is speeding in a car, stealing, or vandalism, these behaviours need to be controlled or else society will live in pure chaos. We need laws to reprimand those who behave in these manners in order to protect those that do not. If there were no government or laws, there would be complete anarchy. In anarchy a man can exercise his own free will, but while fulfilling their own indulgences, a society would tear at the seams with such a level of selfishness5. Because of this, anarchy would spell the end and destruction of many parts of society such as the family, education institutions, and justice systems because anarchy is life free from man-made laws6and everyone would just exercise their free will as they please. More than anything however, positive law allows us (most of us) ...read more.