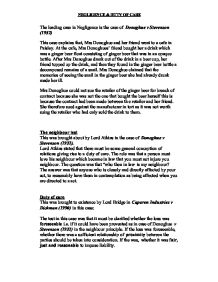 NEGLIGENCE &amp; DUTY OF CARE - The leading case in Negligence is the case of Donoghue v Stevenson (1932)

The question was that "who then in law is my neighbour? The answer was that anyone who is closely and directly affected by your act, to reasonably have them in contemplation as being affected when you are directed to a act. Duty of care This was brought to existence by Lord Bridge in Caparon Industries v Dickman (1990) in this case: The test in this case was that it must be clarified whether the loss was foreseeable i.e. if it could have been prevented as in case of Donoghue v Stevenson (1932) in the neighbour principle. If the loss was foreseeable, whether there was a sufficient relationship of proximity between the parties should be taken into consideration. ...read more.

* Foreseeability of risk which states that there is no obligation on the defendant for risk other than those within reasonable contemplation. It is unfair to impose liability where risk was unforeseeable as in the case of Roe v minister of health (1954. * Magnitude or degree of risk which states that the care expected depends on the likelihood of the risk as in the case of Bolton v stone (1951). * Experts of professional. * Practicality or prevention (of the risk). Causation In English law, causation is linked to be established between the breach and the resulting damage i.e. on link no liability. In often time, there is no problem when a link is shown because it is fairly obvious that the injury sustained was caused by the negligence. ?? ?? ?? ?? NEGLIGENCE & DUTY OF CARE ...read more.