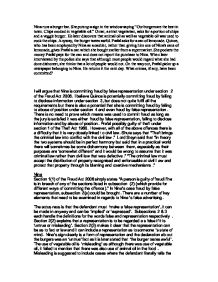 Nina runs a burger bar. She puts up a sign in the window saying Our burgers are the best in town. Chips cooked in vegetable oil. Omar, a strict vegetarian, asks for a portion of chips and a veggie burger. He later discovers that animal oil a

Nina runs a burger bar. She puts up a sign in the window saying "Our burgers are the best in town. Chips cooked in vegetable oil." Omar, a strict vegetarian, asks for a portion of chips and a veggie burger. He later discovers that animal oil as well as vegetable oil was used to cook the chips. Anyway, the burger tastes awful. Prafal asks for a can of lemonade. Quince, who has been employed by Nina as a cashier, rather than giving him one of Nina's cans of lemonade, gives Prafal a can which she bought earlier from a supermarket. She pockets the money Prafal pays for the can and does not report the purchase to Nina. When later interviewed by the police she says that although most people would regard what she had done dishonest, she thinks that a lot of people would not. On the way out, Prafal picks up a newspaper belonging to Nina. He returns it the next day. What crimes, if any, have been committed? I will argue that Nina is committing fraud by false representation under section 2 of the Fraud Act 2006. I believe Quince is potentially committing fraud by failing to disclose information under section 3, but does not quite fulfil all the requirements but there is also a potential that she is committing fraud by failing to abuse of position under section 4 and even fraud by false representation. There is no need to prove which means was used to commit fraud as long as the jury is satisfied it was either fraud by false representation, failing to disclose information and by abuse of position. ...read more.

I think that, although there is a false representation in that the can was Quince's not Nina's, the legal duties that Quince is under as an employee to provide Prafal with Nina's wares, rather than her own, and if she did replace it, to inform Prafal of this, is a much stronger and more obvious aspect. The offence under section 3 has many of the elements already discussed. Quince's actions satisfy subsections 1, 2 and 3 of section 2 of the Fraud Act, as she has acted in a dishonest manner by falsely and misleadingly representing her own can of lemonade as one of Nina's, with a view to gain, which is confirmed when she keeps the money that he receives from the sale. This offence deals with 'deception by silence'. The important element in this situtation is that, according to s2(4), for a fraud by false representation, the "representation may be express or implied". As such the omission by Quince to mention that the can was hers, and not from Nina's van as Prafal would have undoubtedly assumed, could constitute an implied representation. However, the offence is only committed when there is a legal duty' for the defendant to disclose appropriate information to another. If it is viewed that Quince, by her actions, "dishonestly fails to disclose to another person information which she is under duty to disclose", then she has fulfilled section 3(1a). Obviously, this needs to be disconstructed into its various parts. Firstly, there is the element of dishonesty, which is determined by the Ghosh test already outlined. Her claim that "although most people would regard what she had done dishonest, she thinks that a lot of people would not", suggests her recognition that the majority would find her actions dishonest. ...read more.

The owner's consent is not important, the key is the defendant's belief, however unreasonable, that the victim would consent. It is quite likely that Nina may have been generous and let Prafal use it, but then again she may not have, and there is not enough evidence to determine this. The final element of mens rea is the issue of intention to permanently deprive Nina of the newspaper. Prafal's quick return of the newspaper suggests there was no intention to deprive Nina permanently. However, the definition of this issue under section 6(1) includes the possibility of borrowing in some form as an intention to permanently deprive, "a borrowing or lending of it may amount to so treating it if, but only if, the borrowing or lending is for a period and in circumstances making it equivalent to an outright taking or disposal". Prafal returned the newspaper the very next day. In Lloyd the judge decided 'borrowing is ex hypothesi not something which is done with an intention permanently to deprive.' This subsection intended to make it clear that a mere borrowing is never enough to constitute the necessary guilty mind unless the intention is to return the "thing" in such a changed state that it can truly be said that all its goodness or virtue has gone". Newspapers are daily so arguably the newspaper's 'virtue has gone' and would not be particularly useful, as Nina would have had to buy another newspaper to find out the days news, he dprived Nina of her newspaper during it's most useful period. However, it is still usuable after the day, so it should be concluded there was no intention to permanently deprive Nina of the newspaper and therefore no theft amounts from Prafal's actions. ? ...read more.