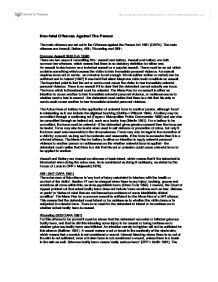 Non-fatal Offences Against The Person The main offences are set out in the Offences against the Person Act 1861 (OAPA). The main offences are Assault, Battery, ABH, Wounding and GBH. Common Assault (S39 CJA 1988) There are two ways of committing this : assault and battery. Assault and battery are both common law offences, which means that there is no statutory definition for either one. An assault is also known as a technical assault or a psychic assault. There must be an act which contains something which causes the victim to fear immediate personal violence. An assault requires some act or words - an omission is not enough. Words (either written or verbal) can be sufficient and in Ireland (1997) it was held that silent telephone calls could constitute an assault. The important point is that the act or words must cause the victim to fear immediate unlawful personal violence. There is no assault if it is clear that the defendant cannot actually use force. The force which is threatened must be unlawful. The Mens Rea for an assault is either an intention to cause another to fear immediate unlawful personal violence, or recklessness as to whether such a fear is caused - the defendant must realise that there is a risk that his acts or words could cause another to fear immediate unlawful personal violence. ...read more.

S18, which also involves inflicting GBH, has a maximum of life. Another problem is the fact that the prosecution has to prove an assault or battery for S47 but not for S20 and S18. S47 and S20 have Mens Rea's to commit lesser offences than the harm actually caused, for example, the Mens Rea of S47 is only an intention or recklessness as to an assault or battery and does not require the defendant to have forseen the causing of any ABH. This appears unjust, as does the fact that a person who causes a small cut can be charged with the more serious offence of S20 instead of S47. Clearly there are different levels of wound and many of them do not equate with GBH. In 1993 the Law commission proposed a draft bill which addressed many of the above criticisms. It uses modern language, provides a logical structure of offences and has a graded and appropriate hierarchy of sentences. It also abolishes the technical distinction between assault and battery, and also the arbitrary division between GBH and wounding, which will make the law more accessible to juries and will lead to more consistent jury verdicts. However, even though the bill was sent out for consultation in 1998, the Government has done nothing more and the Law remains in an unsatisfactory state. ...read more.