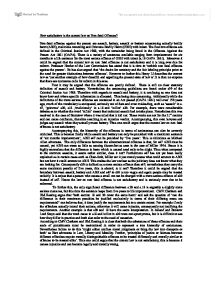 How satisfactory is the current law on Non-fatal Offences? Non-fatal offences against the person are assault, battery, assault or battery occasioning actually bodily harm (ABH), malicious wounding and Grievous Bodily Harm (GBH) with intent. The first two offences are defined in the Criminal Justice Act 1988, with the remainder being found in the Offences Against the Person Act 1861 (OAPA). There is a variety of sentences available ranging from imprisonment for six months to a life sentence for the most serious offence of GBH with intent (s.18 OAPA 1861). Moreover it could be argued that the current law on non fatal offences is not satisfactory and it is long over due for reform. Professor Horder of the Law Commission has stated that it is time to 'rethink non fatal offences against the person'. He has also argued that 'the desire for certainty and the fair labeling principle point to the need for greater distinctions between offences'. However to further this Henry LJ describes the current law as 'yet another example of how dreadful and appalling the present state of law is'.It is then no surprise that there are numerous calls for reform in this area. ...read more.

Thus when compared to the common assaults, it seems rather similar, does it not? Furthermore s47 has not yet been really explained as in certain cases such as Chan-f**k, Miller etc it just merely states what could amount to ABH but not how it could amount to ABH. This makes the law unclear as the judiciary does not know what they are looking for. Consequently s20 is defined as a more serious offence than s47; nevertheless they carry the same maximum penalty of five years, this is absurd, is it not? Therefore it could be argued that the boundary between assault, battery and ABH and s47 to s20 is too vague and again people may be treated unfairly. It is unjust that a person who causes a small cut can be charged with a more serious offence of s20 instead of s47. Hence the law on non fatal offences is not satisfactory and is seriously over due to be reformed. To further this, the only significant difference between s.20 and s.18 is arguably a slightly more serious mens rea, but this time the sentence leaps from five years to life imprisonment. ...read more.

This would enable more people to understand the current law and maybe might reduce the crime levels, as they might know what there actions could amount to. Under the Bill the structure has been severely revised. For example s.18 is replaced by 'intentionally causing serious injury' which will contain maxima of life, whereas s20 by 'recklessly causing injury' will contain maxima of 5 years. Additionally s47 will be by 'intention and or recklessness and will have a maximum of 2 years. By improving the structure and simplifying would make life a great deal better. This is because the current structure is too complicated. Nevertheless the term assault will still be used but for two separate offences of assault and battery. The aforementioned reforms should make the law clearer and classifying an offence should be less complicated. However one aspect which also should be considered is the idea of codification, joining all the offences and acts together as currently they are all disjointed. A new enactment should be created and established and this would contain everything associated with non fatal offences. It would fundamentally make the law easy, as all the aspects would be in one place. ?? ?? ?? ?? ...read more.