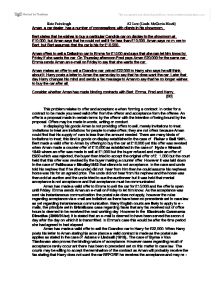 Offer and acceptance when forming a contract.

Aman, a car dealer, has a number of conversations with clients in his showroom. Bert states that he wishes to buy a particular Candida car on display in the showroom at �10,000, but Aman says that he could not sell it for less than �10,500. Aman says no more to Bert, but Bert assumes that the car is his for �10,500. Aman offers to sell a Delissimo car to Emma for �15,00 and says that she can let him know by Friday if she wants the car. On Thursday afternoon Fred pays Aman �20,000 for the same car. Emma sends Aman an e-mail on Friday to say that she wants the car. Aman makes an offer to sell a Grandino car, priced �22,000 to Harry who says he will think about it. Harry posts a letter to Aman the same day to say that he does want the car. Later that day Harry changes his mind and sends a fax message to Aman to say that he no longer wishes to buy the car after all. ...read more.

In the case and uncle told his nephew that if he (the uncle) did not hear from him then he could assume his nephews horse was his for an agreed price. The uncle did not hear from his nephew and the horse was then sold at auction and the uncle tried to sue the auctioneer but it was held that mental acceptance is not acceptance and that acceptance must be communicated. Aman has made a valid offer to Emma to sell the car for �15,000 and the offer is open until Friday. Emma sends Aman an e-mail on Friday to let him know. As the acceptance was sent via instantaneous communication the postal rule does not apply, however the rules regarding acceptance via e-mail are indistinct as there have been no precedents set in case law as yet regarding instantaneous communication. Many English courts are likely to apply to e-mails, the principle set in Brinkibons case regarding faxes that any fax received out of office hours is deemed to be received the next working day. ...read more.

Bert's offer of �10,000 was revoked via counter offer from Aman. However it is debatable whether Aman was making a counter offer for Bert to accept or merely refusing the first offer. In any case Bert had not communicated his intent to buy the car there has been no contract formed between the two. Silence is not acceptance. In Emma's situation the lapse of time has lead to the revocation of the offer as the precedent of Ramsgate Hotel CO V Montefiore. Fred has made a valid contract with Aman, as the offer to Emma was revoked. both parties have provided offer, acceptance and consideration in the form of �20k for car and so the contract is valid, Emma has no legal claim on the car. However, if Emma had accepted the offer by post or phone then it would be a different state of affairs as Aman made the offer to her first. Harry has made a valid contract with Aman as he accepted via post. However, as previously stated it would be debatable in court. WORD COUNT: 824 words Kate Fairclough A2 Law (Linda McGavin-Black) ...read more.