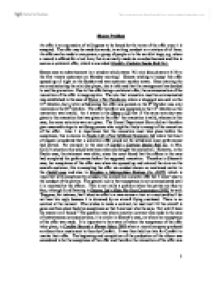 Sheena Problem An offer is an expression of willingness to be bound by the terms of the offer once it is accepted. The offer may be made by words, in writing, conduct or a mixture of all three. An offer can be made to one person, a group of people or to the world at large, e.g. where a reward is offered for a lost item, this is normally made via an advertisement and this is seen as a unilateral offer, which is one sided (Carlill v Carbolic Smoke Ball Co.). Sheena sees an advertisement in a window which states 'All mini disc players at � 10 to the first twenty customers on Monday morning'. Sheena wishing to accept this offer queued up all night on the Sunday and was customer number seven. Once entering the store and selecting the mini disc player, she is informed that the management has decided to end the promotion. Due to this offer being a unilateral offer, the communication of the revocation of the offer is inappropriate. The rule that revocation must be communicated was established in the case of Byrne v Van Tienhoven, where a telegraph was sent on the 11th October, but a letter withdrawing the offer was posted on the 8th October was only received on the 20th October. ...read more.

An example of a case which is similar to Sheena's is Fisher v Bell based on the display of goods with a price ticket attached. Where the defendant displayed a flick knife in his shop window. He was convicted of a criminal offence of offering knives for sale, but on an appeal, Lord Justice Parker stated that it was an "invitation to treat not offer", therefore the conviction was overturned contrary to the legislation. In this circumstance, the shoes Sheena wished to purchase are in fact an "invitation to treat", otherwise if it was a offer, then on taking them to the cash desk she would be accepting the offer, as Lord Justice Somervell stated in the Boots Case : "otherwise customers wouldn't be able to change their minds". In this case, Boots was charged with the offence concerning sale of certain medicines which could only be sold by a pharmacist, or under supervision of a qualified pharmacist. The issue was that when a customer picked the medicine up off a shelf, they were not being supervised and therefore was committing an offence. The Court of Appeal stated that the shelf display was not an actual offer but an invitation to treat and therefore the offer is made by the customer when being paid for at the cash desk, at this point it would be supervised by a pharmacist, therefore there was no offence. ...read more.

Therefore Sheena took the wallet back to Nick without being aware of the reward therefore she was not motivated by the offer and the existence of the offer had no effect on her returning of the lost wallet. Another case following along the same line as motive for acceptance is Williams v Carwardine (1833) where the person actually was aware of the reward but gave the information due to the motives of spite and revenge. Although she gave information for this, she was aware of the reward and therefore was entitled to the reward. In conclusion, Sheena was entitled to purchasing the mini disc player for � 10 due to her accepting the offer, the offer was never revoked as it must take place before acceptance and on queuing and entering the store, Sheena had accepted the offer. Not enough reasonable steps were taken to revoke the offer before acceptance. Sheena will only be able to purchase the shoes for � 25 if she offers a counter offer of � 25 and the cashier, Tom, accepts this, otherwise no contract will be made without an acceptance. Nick does not need to give Sheena the reward, although he may offer it her, he does not have to as she was unaware of the reward before returning it to him, and she returned this to him without a need for a motive. ?? ?? ?? ?? 1 ...read more.