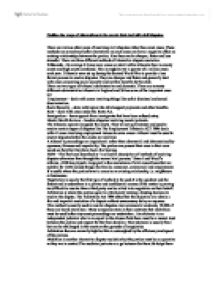 Outline the range of alternatives to the courts that deal with civil disputes There are various other ways of resolving civil disputes rather than court cases. These methods are sometimes better alternatives as court cases can have a negative effect on existing relationships between the parties. Also they can be cheaper, faster and less stressful. There are three different methods of alternative dispute resolution. Tribunals - On average 6 times more cases are dealt within tribunals than in county courts and high courts combined. This is roughly over a quarter of a million cases each year. Tribunals were set up during the Second World War to provide a less formal process to resolve disputes. They are cheaper and faster and generally deal with cases concerning social security and welfare benefits by the state. There are two types of tribunal administrative and domestic. There are seventy different administrative tribunals in England and Wales some of the important ones are: Employment - deals with cases involving things like unfair dismissal and s****l discrimination. ...read more.

This method is usually used to resolve disputes over commercial contracts, 10,000 of these are heard every year. Many companies state in their contracts that arbitration must be used before any court proceedings are undertaken.. An arbitrator is an independent judicator who is an expert in the chosen field there must be a mutual trust between the parties and respect for the final decision. Their decision is usually final but can be challenged in the courts on the grounds of irregularity. Arbitration fees are normally high but this is outweighed by the efficiency and speed of the process. Mediation is another alternative dispute resolution but the parties must be co operative as they are in control.The mediator just acts as a go between for them.He helps them come to a compromise by exploring the needs between the two parties and making offers for them. This method is becoming more important in divorce cases regarding property and custody as the court route is undesirable as it complicates issues and aggravates the parties. ...read more.

For businesses ADR is useful because they don't have to make their confidential information public like in a court and businesses can remain on good terms with each other. Many disputes are complicated and can be dealt with more effectively by someone who is an expert in that field. A judge may have a general understanding of a case but an arbitrator will have worked on that point of law for many years and therefore can produce a more just decision. The disadvantages of ADR are that in most cases, public funding is not available making it open to people who can afford it only.It is available on rare occasions. The lack of legal representation can make the process difficult for a party to cope. This also means one party maybe stronger and dominates the other resulting in a decision that doesn't fully benefit the weaker party. The lack of precedent reduces certainty for the parties involved. Overall the advantages of ADR outweigh the disadvantages simply because people want justice to be done in a cheaper, simpler and quicker way.ADR provides that and takes a lot of cases off the courts so they can deal with more serious ones. ...read more.