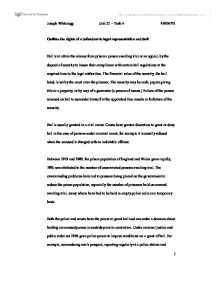 Outline the rights of a defendant to legal representation and bail

Outline the rights of a defendant to legal representation and bail Bail is to attain the release from prison a person awaiting trial or an appeal, by the deposit of security to insure their compliance with certain bail regulations at the required time to the legal authorities. The financial value of the security, the bail bond, is set by the court over the prisoner. The security may be cash, papers giving title to a property, or by way of a guarantor (a person of means.) Failure of the person released on bail to surrender himself at the appointed time results in forfeiture of the security. Bail is usually granted in a civil arrest. Courts have greater discretion to grant or deny bail in the case of persons under criminal arrest, for example it is usually refused when the accused is charged with an indictable offence. Between 1979 and 1989, the prison population of England and Wales grew rapidly, 78% was attributed to the number of unconvicted persons awaiting trial. The overcrowding problems have led to pressure being placed on the government to reduce the prison population, especially the number of prisoners held on remand awaiting trial, many whom have had to be held in empty police cells on a temporary basis. ...read more.

Despite it obviously being very necessary to crackdown on bail bandits as they are endangering the public and making a mockery of the law, it does increase the prison population. There are a number of problems with the bail system. A high number of those refused bail are found not guilty, many are eventually given non-custodial sentences and too many people are being held in custody. There have, however, been several initiatives proposed and some implemented to assist the system such as Bail Support Schemes. These are set up to offer advice, counselling and surveillance to those who are granted bail. Bail Hostels are run by the probation service and offer accommodation for defendants awaiting trial which give the defendant freedom, whilst at the same time supervision. If a defendant decides not to have a lawyer to represent them at their trial, they could still instruct a solicitor to help them prepare their case and to represent them at the preliminary hearings, thus taking advantage of their knowledge of procedure, points of law and tactics. They could then 'sack' their solicitor just before the trial so that they can represent themselves. They may be able to get legal aid for their case, but even if the case is considered minor and would not entitle them to legal representation in court, a solicitor may still be able to advise them under the legal aid advice and assistance scheme. ...read more.

The Community Legal Service offers legal representation and help within all areas of civil courts. Private solicitors firms, Citizens Advice Bureaux's and salaried employees of the Community Legal Service, provide all CLS services. Many have blamed the government of trying to save money before justice, by having a fixed budget, and low boundaries for free legal aid and representation. Criminal legal aid has in the past and will still continue to be demand-led, meaning that civil law will get the remaining allowance when criminal legal aid is paid for, so the amount will vary from year to year, putting a strain on solicitors. Once the budget has run out, the government will not pay out any more funds, so any other cases left over are not even considered for legal aid and will be expected to fund the case themselves. Cases that may challenge any form of government action may be unable to find their way to court, as many solicitors are unlikely to take on the case for fear of losing their contracts and becoming unpopular with the government and officials. The system of using contracts has reduced the number of places to get advice and aid for free that the public can go to and many believe that there will continue to be a reduction in access to legal services. ...read more.