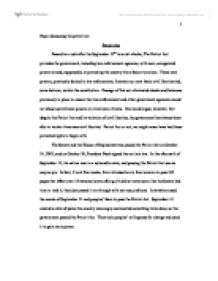 Paper discussing the patriot act Patriot Act Passed in a rush after the September 11th terrorist attacks, The Patriot Act provides the government, including law enforcement agencies, with new, unregulated powers aimed, supposedly, at protecting the country from future terrorism. These new powers, previously denied to law enforcement, threaten our most basic civil liberties and, some believe, violate the constitution. Passage of this act eliminated checks and balances previously in place to ensure that law enforcement and other government agencies would not abuse surveillance powers on American citizens. One could argue, however, that despite the Patriot Act and its violation of civil liberties, the government has always been able to violate American civil liberties. Patriot Act or not, we might never have had these protected rights to begin with. The Senate and the House of Representatives passed the Patriot Act on October 24, 2001, and on October 26, President Bush signed the act into law. In the aftermath of September 11, the nation was in a vulnerable state, and passing the Patriot Act was as easy as pie. ...read more.

They also question a lot of what the Department of Justice (DOJ) releases on the subject. Since most citizens have not actually read the Patriot Act, their opinions are skewed by other people. And since both the ACLU and the DOJ spread a lot of propaganda and distort a lot of the facts, it makes it harder to see the bigger picture. The truth is probably that, while many things contained in the Patriot Act are very radical, other parts are not so bad. The Patriot Act requires, in part, that some previously unregulated activities now be regulated. On the other hand, it greatly expands government powers and allows certain agencies to spy on ordinary people without probable cause or any kind of evidence. The most frightening part about the Patriot Act seems to be its lack of specificity. This leaves the government with a lot of power to define exactly what the Patriot Act really means. Section 215 is one of the most debated and controversial sections of the Patriot Act because it affects the privacy rights of all U.S. ...read more.

How can it be called the "land of the free" if people run from anything that is different by restricting it or throwing it away? Perhaps a new definition of freedom is needed. In a "free" America, there would be freedom to create restrictions, freedom to restrict freedom as a group, and the freedom to fight the created restrictions. As the Patriot Act is being revisited, we really need to stop and take a look at were we are now and think about what direction we want to be heading in the future. Since this country was founded based upon the belief that peoples rights come before every thing else. Americans have a chose to make, weather or not we want to protect our founding fathers original beliefs. Or if we want to take the easy way out and destroy the ideals upon witch this country was founded on. One thing that we should try and keep in mind is that the right way is not necessarily always the easiest way. Since we are always held at such high standards and always put on the spot light by every one, we need to try and set a good example even if it does take a little more effort. 1 ...read more.