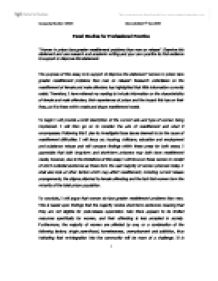 Penal Studies for Professional Practice "Women in prison face greater resettlement problems than men on release". Examine this statement and use research and academic writing and your own practice to find evidence to support or disprove this statement. The purpose of this essay is to support of disprove the statement "women in prison face greater resettlement problems than men on release". Research undertaken on the resettlement of female and male offenders has highlighted that little information currently exists. Therefore, I have widened my reading to include information on the characteristics of female and male offenders, their experiences of prison and the impact this has on their lives, as it is these which create and shape resettlement needs. To begin I will provide a brief description of the current rate and type of women being imprisoned. I will then go on to consider the aim of resettlement and what it encompasses. Following this I plan to investigate those issues deemed to be the cause of resettlement difficulties. I will focus on; housing, childcare, education and employment and substance misuse and will compare findings within these areas for both sexes. I appreciate that both long-term and short-term prisoners may both have resettlement needs, however, due to the limitations of this essay I will focus on those women in receipt of short custodial sentences as these form the vast majority of women prisoners today. I shall also look at other factors which may affect resettlement; including current release arrangements, the stigma attached to female offending and the fact that women form the minority of the total prison population. To conclude, I will argue that women do face greater resettlement problems than men. This is based upon findings that the majority receive short-term sentences meaning that they are not eligible for post-release supervision. Also there appears to be limited resources specifically for women, and their offending is less accepted in society. ...read more.

custody or their children, but also if the child is resistant or shows signs of resentment as this will make it difficult to re-establish the relationship (O'Dwyer, Wilson & Carlen, cited Carlen & Worrall 1992, p187). My research has also identified that some women experience resettlement problems related to lack of education and training. For example, a 2001 resettlement survey found that only 18% of women had employment or training courses arranged on release, compared with 30% of males (Home Office, 2003). Also, when interviewed five to nine months after discharge only 25% were in employment. This may be in part due to an "absence of an overall assessment of the educational and vocational needs of the [female] prison population" (HM Chief Inspector of Prisons 1997, p120) It appears that women do not have access to the same range of opportunities for work and education. This may be due to the fact that there is the expectation that the majority of women offenders are mums, therefore they wont be seeing work on release (House of Commons Home Affairs Committee 2004, p89). Furthermore programmes inside prison such as 'Enhanced Thinking Skills' and 'Cognitive Skills Booster' (House of Commons Home Affairs Committee, 2004 p88) Programme tend to focus on the rehabilitation of women offenders using Cognitive Behavioural techniques. However not only have these programmes been designed for men, but also it is known that interventions based on developing cognitive skills are of little use for women, who have little deficiencies in this area and who are more in touch with their feelings than their male counterparts (Carlen 2002). They also fail to accommodate the needs of women Foreign National offenders' who do not speak English and hence will neither understand nor benefit from such interventions (Singh, 2004). Lacking the relevant skills and experience and often having resumed childcare responsibilities many women face unemployment on release and hence consequently are forced to become reliant on benefits. ...read more.

Having undertaken research I have formed the opinion that women at present do face greater resettlement problems than men. This is primarily based on the premise that women are more likely to receive short custodial sentences deeming them ineligible for statutory probation supervision. Also due to the fact that they currently constitute such a small percentage of the overall prison population, their needs seem to have been forgotten or overlooked. Whilst it has been acknowledged that men and women have different needs which warrant a distinct response, at present they are still part of a system that was designed to cater for men. Furthermore having analysed the particular areas set out in the introduction of this paper, it would appear that they face particular strains related family responsibilities and childcare as many women offenders are single parents. In addition, on release many women find themselves homeless, unemployed and some even suffering from drug addictions, therefore one or a combination of these factors will render women vulnerable and insecure and more in need of resettlement help and advice. It has been accepted that the Government and Criminal Justice System as a whole are working to improve resettlement services for women. Not only by the introduction of NOMS, but also with new policies and legislative changes. However, these are still in their infancy and do not come without complications such as need for additional resources and co-operation and communication between the various agencies involved. Finally, it must be remembered that women offenders are not a homogenous group of individuals and hence some may encounter little difficulties resettling. Also individual choice and decision making are integral to avoid re-offending and allow effective re-integration. Furthermore, I am not of the opinion that men do not face resettlement problems, however I would argue that the Criminal Justice System currently exhorts and essentially male ethos and whilst efforts are being made to modify this, more resources need to be injected into putting some of these well documented policies into action. ...read more.