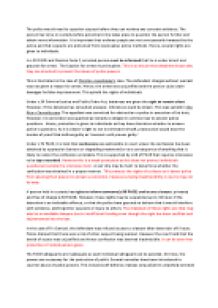 Police Powers and the Rights of Arrested Persons Notes

﻿The police would need to question suspect before they can retrieve any concrete evidence. The person has to be in custody before potential crime takes place to question the person further and obtain more information. It is important that ordinary people are not unnecessarily harassed by the police and that suspects are protected from overzealous police methods. Hence, several rights are given to individuals. In s.28 PACE and Caution Code C, arrested person must be informed that he is under arrest and grounds for arrest. The Caution for arrest must be given. This is to ensure that detainees know why they are arrested to prevent the abuse of police powers. This is illustrated in the case of Christie v Leachinsky?s case. ...read more.

Hence, protection is given to individuals as they have discretion whether to answer police?s questions. As it is citizen?s right to not incriminate himself, prosecution would bear the burden of proof that defines guilty as ?innocent until proven guilty.? Under s 76 PACE, it is held that confessions are admissible in court unless the confession has been obtained by oppression (torture or degrading treatment) or as a consequence of anything that is likely to render the confession unreliable. This is supported by s.60 of PACE that requires interviews to be tape recorded. However this is a weak protection as this does not protect individuals questioned outside the interview room. A voir dire may be held to determine whether the confession was obtained in a proper manner. ...read more.

The drawback of these rights are that may also be no available lawyers due to insufficient funding even though the right has been codified and implemented into the law. In the case of R v Samuel, the defendant was refused access to a lawyer after detention of 6 hours. Police claimed that there was a risk of other suspect being warned. However the court held that the denial of access was unjustified and hence confession was deemed inadmissible. It can be seen that protection of individuals are given The PACE safeguards are inadequate as each individual safeguard can be avoided. At times, the powers are necessary for the protection of public. Several remedies have been introduced to counter abuse of police powers. This includes self-defense, habeas corpus(victim unlawfully arrested to secure immediate release) and legal proceedings to be brought against the police. This promotes the rights of individuals; hence it can be more balanced to police powers. ...read more.