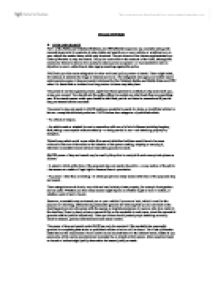 Police powers vs Stop and Search

POLICE POWERS * STOP AND SEARCH Part 1 of the Police and Criminal Evidence Act 1984 (PACE) empowers any constable acting with reasonable grounds for suspicion to stop, detain and search you or your vehicle, or anything in or on your vehicle for certain items, which may be seized. The provisions of the Act are supplemented by a Code of Practice on stop and search. The police must observe the contents of the Code, although the remedy for failure to observe it is usually to make a police complaint - or if prosecuted to raise an objection in court - rather than to take legal proceedings against the police. PACE also provides some safeguards for other well-used police powers of search. These might relate, for instance, to searches for drugs or firearms and so on. The safeguards also apply in a limited way to controversial powers of stop and search introduced by the Criminal Justice and Public Order Act 1994 when it is feared that an incident involving serious violence may take place. The police do not have general powers, apart from those specified in a statute, to stop and search you, unless you consent. ...read more.

A constable may use reasonable force, if necessary, in the detention and conduct of the search, but force can only be necessary if you are first given the opportunity to cooperate and refuse. The safeguards in PACE and in the Code of Practice do not apply to the routine searching of those entering sports grounds or other premises with their consent or as a condition of entry. Likewise, nothing in PACE or in the Code affects the ability of an officer to search you in the street on a voluntary basis provided that you are capable of understanding to what it is you are consenting. Juveniles and people suffering from a mental handicap or disorder and others who appear not to be capable of giving an informed consent should not be subject to a voluntary search. * ARREST The police may arrest with or without a warrant. There are many powers of arrest under a warrant issued by a justice of the peace or judge, and the rules governing each of them is set out in the statute creating the power. This section deals with police powers of arrest without a warrant. ...read more.

injury - including disease and impairment - of any person, or a substantial financial gain or serious financial loss to any person. For the purposes of denial of access to a solicitor and notification of detention, certain offences under the prevention of terrorism legislation. An arrest is unlawful unless you are told that you are under arrest and the grounds for the arrest at the time. Such an unlawful arrest will become lawful when the police tell you the reason for the arrest. This information must be given at the time of the arrest or as soon as possible afterwards. The information need not be given if it was not reasonably practicable to do so because of your escape from arrest before it could be given. If you attend voluntarily at a police station - or any other place with a constable - without having been arrested you are entitled to leave at will unless placed under arrest. Under PACE the police are allowed to use reasonable force when exercising their powers. Under Article 2 of the Human Rights Act 1998 only the use of force, which is absolutely necessary, is permitted and so use of any greater force may be a violation of this Article. ...read more.