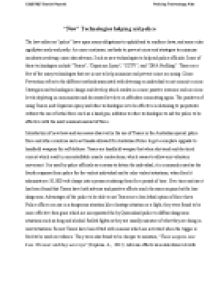 ﻿C3187927 Daniel Pazeski Policing Technology Aids ?New? Technologies helping aid police The law enforcers ?police? have upon many obligations to uphold and to reinforce laws, and some rules rigidly/securely and justly. As crime continues, methods to prevent crime and strategies to minimize incidents involving crime also advance, Such as new technologies to help aid police officials. Some of these technologies include ?Tasers?, ?Capsicum Spray?, ?CCTV?, and ?DNA Profiling?. These are a few of the many technologies that are in use to help minimize and prevent crime occurring. Crime Prevention refers to the different methods associated with deterring an individual to not commit a crime. Strategies and technologies change and develop which results in a more positive outcome such as crime levels depleting in communities and decreased levels to re-offenders committing again. The positives of using Tasers, and Capsicum spray and other technologies is to be effective in detaining to perpetrator without the use of lethal force such as a hand gun, addition to other technologies to aid the police to be effective with the most minimal amount of force. Introduction of new laws and successes observed in the use of Tasers in the Australian special police force and other countries such as Canada allowed for Australian Police to get a complete upgrade to handheld weapons for self-defense. ...read more.

The issue of privacy has arisen from the use of CCTV as they have been linked to invasion of privacy, they have also been linked to some country becoming Police states much like an Orwellian novel due to the amount of CCTV cameras used in specific areas. Such as voyeurism occurring in many cases 1 in 10 women were targeted.(BBC CCTV cameras 2006, Keeping CCTV In Bounds 2013) Police use other methods of accumulating evidence and or information. This recently new technology DNA Profiling has been integrated for police use to help justify cases. DNA (Deoxyribonucleic Acid) is a molecule that contains and individual?s genetic information. DNA is located in the nucleus of every cell all through the human body. The positives of DNA Profiling is that it can be very accurate means of obtaining a suspects DNA to either identify a body that has been found, or to play a crucial role in comparing the suspects DNA to determine whether the individual was involved in the crime through the DNA that may have been left behind and used as evidence. There are several negative aspects of DNA Profiling; it poses ethical views on whether the police should keep such samples of individuals who may have been accused of a crime. ...read more.

experience which gets in the way with work, younger inexperienced Police officers are usually the ones causing the problems as they panic in situations that they have never been in before, it was their actions and behavior that has caused the problem not the Tasers or capsicum spray. Technologies such as these are caught in the cross fire in debates because people blame the Taser when in fact it is a safe self-defense weapon to use, much goes the same with capsicum spray. The invasion of privacy and liberty is also another bigger issue that needs to be addressed, overall the CCTV cameras has helped solve so many crimes such as drunken brawls and robbery cases than any other form of Police equipment as it gathers an accurate database and picture of what happens in its surroundings. Smaller issues such as their use for voyeurism and invasion of someone privacy are big statements in a democratic world where liberty and freedom, and privacy are the building blocks of democracy. Instead of targeting the CCTV which is used by the Police and business owners to protect their jobs issues such as who gets them and who is allowed to have them should be dealt with first, in right only Police should be able to use them in this way inappropriate things can?t be done with the CCTV footage. ...read more.