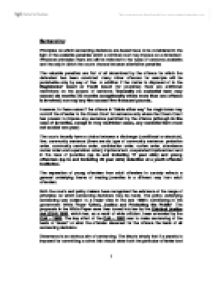 Principles on which sentencing decisions are based

Sentencing: Principles on which sentencing decisions are based have to be considered in the light of the available penalties which a criminal court may impose on a defendant. Whatever principles there are will be reflected in the types of sentence available and the way in which the courts choose between alternative penalties. The valuable penalties are first of all determined by the offence for which the defendant has been convicted: many minor offences for example will be punishable only by way of fine. In addition if the matter is disposed of in the Magistrates' Court or Youth Court (for juveniles) there are additional restrictions on the powers of sentence. Generally no custodial term may exceed six months (12 months exceptionally where more than one offence is involved) nor may any fine exceed five thousand pounds. However, in these cases if the offence is 'triable either way' the magistrates may commit the offender to the Crown Court for sentence only where the Crown Court has powers to impose any sentence permitted by the offence (although in the case of juveniles, except in very restricted cases, any custodial term must not exceed one year). The courts broadly have a choice between a discharge (conditional or absolute), fine, community sentence (there are six type of community sentence: probation order, community service order, combination order, curfew order, attendance ...read more.

them could be regarded as an aggravating feature of an offence which made it more serious, thus justifying a higher sentence on a desert-based approach. The CJA - 1991 restricts the use of custody (both for juveniles and adults) to three circumstances (s1 of CJA - 1991): first, where the offence is so serious that only imprisonment can be justified; secondly, where the offence is a violent or s*x offence and imprisonment is necessary to protect the public from serious harm and finally, where an offender has refused to consent to a community sentence. Thus, imprisonment in the case of a non-violent or s*x offence cannot be justified on the basis of public protection or exemplary deterrent, only on the basis of giving the offender what he deserves for that offence. This new approach was aggravated by provisions since repealed by the CJA - 1993 which restricted the courts ability to take into account previous convictions in considering the seriousness of the offence. Previous convictions may now be regarded as features which make the offence more serious. The length of imprisonment should reflect the seriousness of the offence (s2 of CJA - 1991) and in the case of violent or s*x offences such longer period as is necessary to protect the public. Similarly both community sentence and fines (s18 of the CJA 1991 as amended) ...read more.

These might include co-operation with the police or guilty plea on the one hand or pre-meditation or the use of violence or a weapon on the other. The guilty plea has taken on a new significance since the introduction of s48 of the Criminal Justice and Public Order Act - 1994. This requires a sentencing court to take into account, when a guilty plea is entered, the stage and circumstances in which the guilty plea was indicated by the accused. This reflects the policy of rewarding offenders who save court time and spare the worry of the victim. The earlier guilt is indicated, the greater may be the sentence reduction. A guilty plea but without acceptance of the prosecution's version of facts might lose some, or all, credit if a 'Newton hearing' is forced. [A Newton hearing is held when the facts on which a guilty plea were based are in dispute; for example, the extent of damage or injury might be disputed] The principles used in setting appropriate sentences for individuals are wide ranging. Whilst desert appears to have been crucial under the CJA - 1991, along with a greater range of more flexible rehabilitative sentences particularly for juveniles, it seems likely that incapacitation and deterrence are likely to be given greater prominence in the government's forthcoming legislation on criminal justice. 1 ...read more.