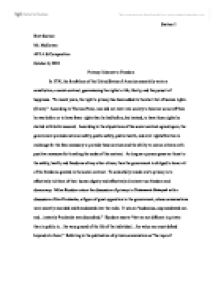 Brett Switzer Mr. McGowan AP Lit & Composition October 9, 2003 Privacy: Inherent to Freedom In 1776, the forefathers of the United States of America essentially wrote a constitution, a social contract, guaranteeing the rights to life, liberty, and the pursuit of happiness. "In recent years, the right to privacy has been added to the short list of human rights (Grant)." According to Thomas Paine, man did not enter into society to become worse off than he was before or to have fewer rights than he had before, but instead, to have those rights he started with better secured. According to the stipulations of the social contract agreed upon, the government provides national safety, public safety, public health, and civil rights/liberties in exchange for the fees necessary to provide these services and the ability to coerce citizens with punitive measures for breaking the codes of the contract. As long as a person poses no threat to the safety, health, and freedoms of any other citizen, then the government is obliged to honor all of the freedoms granted in the social contract. ...read more.

The next day, my parents received a call that I was suspended and that I would have to go before the executive board, the superintendent, and the bishop of the diocese at Christ the King. In a letter that my best friend had written to his girlfriend (my previous girlfriend with whom I am still great friends with), there were comments about purchasing a gun off the internet, and implications that he could not wait to use it. I also made a comment about our plans for the weekend. Making our private letters public turned an innocent eighth grade paintball trip into a threat to the students and members of the community. Being punished even after clearing the matter up, my mind and mouth were shut by unfair infringements upon my privacy. Kundera states that every person withholds information about themselves because "the private and public are two essentially different worlds" and that the private world is not to be tampered with, and within a few years, two prime examples come to mind. ...read more.

After the United States began to monitor his private actions, the government became aware that he had given up the names of three double agents, two of which were killed upon their return to Russia, and top secret documents that endangered American lives, for over one million dollars in assets. While Agent Hanson put the American Public at risk, simple events in the past such as former President Bill Clinton's marijuana experience or President George Bush's drinking problem from which he has recovered are not necessary for the American public to know about or to use in judging these distinguished men. Essentially, Kundera's message is that freedom implies privacy, the ability to keep information concealed which could taint one's reputation. This idea of privacy also goes along with the ideas of libel and slander. It is not legal or morally right to publicize a person's mishaps in a way that will decrease his reputation and social standing. When a person puts other people at risk or endangers their freedom however, he forgoes his freedom and loses his right to privacy. It is only then that publication of private matters is fair and necessary. Switzer 1 ...read more.