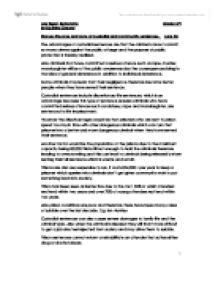 Pros and cons of custodial and community sentences.

Discuss the pros and cons of custodial and community sentences. June 06 The advantages of custodial sentences are that the criminal cannot commit so many crimes against the public at large and the purpose of public protection is thereby realised. Also criminals that have committed a serious offence such as r**e, murder, manslaughter will be of the public awareness also the consequences bring in the idea of general deterrence in addition to individual deterrence. Some criminals may learn from their negligence therefore become better people when they have served their sentence. Custodial sentences include discretionary life sentences, which is an advantage because this type of sentence ensures criminals who have committed serious offences such as robbery, r**e and manslaughter, are sentenced to life imprisonment. However the disadvantages would be that prisoners who are sent to prison spend too much time with other dangerous criminals which can turn that prisoner into a better and more dangerous criminal when they have served their sentence. ...read more.

E.g. Ian Huntley Custodial sentences can also cause severe damages to family life and the criminal's job. Also when the criminal is released they will find it more difficult to get a job also feel rejected from society and may drive them to suicide. Prison sentences cannot reform or rehabilitate an offender that suffers either drug or alcohol abuse. The advantages of community sentences are that criminals are being punished and forced to put something back into society this could be unpaid work which usually consists of 40-300 hours of unpaid work. Community sentences are also cost effective and are around �2400 per sentence. It offers treatment for the mentally ill due to the Mental Health Act 1983. The types of sentences they offer are more suitable for young offenders and also give the right amount of discipline. ...read more.

Some people in the public see it as less favourable compared to custodial sentences which offer imprisonment. The criminal although supervised is still able exposed to the public therefore they can still be a danger to the public. There has also been research that in January 2008 many offenders fail to turn up to their community sentence and are avoiding returning to court claiming they overslept or producing their own sick note. Electronic tagging is quite expensive being estimated at �675 per offender per month. There is also an issue of unpaid fines which makes fines an ineffective punishment. Also there are limits on age to different community sentences which can be a disadvantage due to the fact a young offender may be given a less strict sentence. ?? ?? ?? ?? Law Essay: Sentencing Grade (A*) By Ka Shing Cheung 1 ...read more.