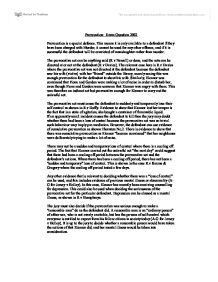 Provocation. The provocative act must cause the defendant to suddenly and temporarily lose their self control as shown in R v Duffy. Evidence to show that Eleanor lost her temper is the fact that in a state of agitation, she bought a container of flammabl

Evidence to show that Eleanor lost her temper is the fact that in a state of agitation, she bought a container of flammable liquid. If an apparently small incident causes the defendant to kill then the jury may doubt whether there had been a loss of control because the provocative act was so trivial such behaviour may imply pre-mediation. However, the defendant can use evidence of cumulative provocation as shown Thornton No.2. There is evidence to show that there was cumulative provocation as Eleanor "became convinced" that her neighbours were deliberately trying to make a lot of noise. There may not be a sudden and temporary loss of control where there is a cooling off period. ...read more.

In this case, Eleanor has recently been receiving counselling for depression. This could also be used when deciding the seriousness of the provocative act for the particular defendant. Depression can be classed as a mental illness, as shown in R v Humphreys. The jury must also decide if the provocation was serious enough to make a "reasonable man" do as the defendant did. A reasonable man is an "ordinary person" of either s*x, who is not overly excitable, but has the powers of self-control which everyone is entitled to expect from his fellow citizen in society today (A-G for Jersey v Holley). It is up to the jury to decide whether a reasonable person would have taken the actions of that Eleanor did, and her mental illness would be taken into consideration. ?? ?? ?? ?? ...read more.