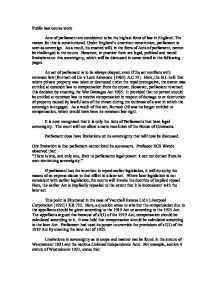 Public law course work Acts of parliament are considered to be the highest form of law in England. The reason for this is constitutional. Under England's unwritten constitution, parliament is seen as sovereign. As a result, its enacted will, in the form of Acts of parliament, cannot be challenged in the courts. However, in practice there are legal, political and moral limitations on this sovereignty, which will be discussed in some detail in the following pages. An act of parliament is to be always obeyed, even if the act conflicts with common law [Burmah oil Co v Lord Advocate {1965} A.C 75]. Here, the H.L held that where private property was taken or destroyed under the royal prerogative, the owner was entitled at common law to compensation from the crown. However, parliament reversed this decision by enacting the War Damages Act 1965. It provided that no person should be entitled at common law to receive compensation in respect of damage to or destruction of property caused by lawful acts of the crown during the outbreak of a war in which the sovereign is engaged. As a result of this act, Burmah Oil was no longer entitled to compensation, which would have been its common law right. It is now recognised that it is only the Acts of Parliaments that have legal sovereignty. ...read more.

Provided that this delegation is lawful, then the U.K. will remain in compliance with the convention and no public authority will violate the convention rights by enforcing the powers given under the Act, since those rights will have been redefined-& limited- by the derogation. In general, courts try their utmost to reconcile if a conflict arises between Human Right's and Acts of Parliament, but if the conflict still remains, then courts apply the Acts of Parliament and then an issue of incompatibility is declared. The government also has the option to derogate. However, there has been no case where incompatibility has changed the law. There have been cases in which parliament has bowed to pressure to amend the law where there has been a breach of the convention (Campbell and Cosans v U.K. 1982); Malone v U.K. (1985). CONCLUSION In the light of all that has been discussed, I conclude that parliament is supreme. It has the power to pass legislation which conflicts with common law, international treaties etc. but it may not choose to use its power for political, moral considerations and fear of electoral defeat. However, there does seem to be one legal fetter, the European Community. The European Court recognises community law as being supreme (Costa v ENEL{1964}) and that the sovereignty of member states has been limited. But parliament could repeal the European Community Act 1972 which would restore total legislative freedom. ...read more.