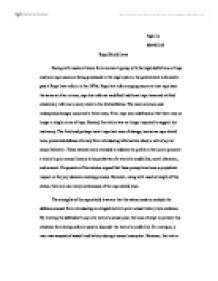 Nghi Le 909401213 r**e Shield Laws Facing with much criticism from women's group with the legal definitions of r**e and how r**e cases are being processed in the legal system, the government is forced to pass a r**e Law reform in the 1970s. r**e law reform urging courts to treat r**e case the same as other crimes, r**e law reforms modified traditional r**e laws and ratified evidentiary reforms in every state in the United States. The most common and widespread changes occurred in three areas. First, r**e was redefined so that there was no longer a single crime of r**e. Second, the victim was no longer required to support her testimony. The third and perhaps most important area of change, known as r**e shield laws, prevented defense attorney from introducing information about a victim's prior s****l behavior. These statutes were intended to address the problem that jurors perceive a victim's prior s****l history to be probative of a victim's credibility, moral character, and consent. Proponents of the statutes argued that these perceptions have a prejudicial impact on the jury decision-making process. However, along with much strength of this statue, there are also many weaknesses of the r**e shield laws. ...read more.

Without r**e shield laws in place, victims may hesitate to disclose the incident to authorities; for fear that details regarding their s****l pasts will ultimately be disclosed. Such disclosure would likely harm not only their reputation, but also result in situations where arguably irrelevant information regarding their past is used against them in court The r**e shield law also helps to keep the victim blaming that continues in our society out of the courtroom. This is essential if victims are to feel comfortable utilizing the criminal justice system after a s****l assault and other crimes. For many years, women have distrust in the America criminal justice system because of the male dominant society. Women often treated unjust and unfair by male dominant society and more specifically in the court system. Therefore, r**e shields laws can play as a stepping-stone as a way to gain back the trust in women in the court and the criminal system. Along with the strengths, there are also some weaknesses to any laws and more specifically the r**e shield laws, is that r**e shield law doesn't prevent r**e. Studies indicate that most rapes are committed by serial offenders. ...read more.

Due to this and the increasing awareness of r**e, there are some people who believe that the r**e shield law is no longer necessary and should be repealed. Some of these people believe that the r**e shield law keeps an accused r****t from receiving a fair trial and that the laws are discriminatory against men. For example, in the case of the Kobe Bryant, DNA expert contended that the woman had s*x with someone other than Bryan in the 15 hours between the alleged r**e and the medical exam, and sperm and s***n from a man other than Bryant were found on the underwear she wore to the exam. If it weren't for the exception rule to the r**e shield laws, those evidences wouldn't be introduced to the trial. As a result, that would play on the advantages of the accuser and it wouldn't be a fair trial for Bryant. Additionally, despite r**e shield laws, evidence of a prior s****l relationship between the victim and the defendant will most likely be admitted, even when evidence concerns a single encounter months before the r**e. This is particularly discouraging for acquaintance r**e cases, where consent is typically a defense. As it shown, the r**e shield laws can play as a strengths and weaknesses both for the victims and defendants. ...read more.