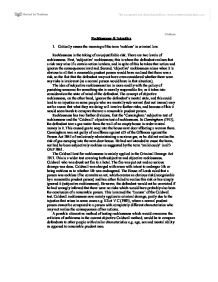 J.Suliman Recklessness & Intention 1. Critically assess the meaning of the term 'reckless' in criminal law. Recklessness is the taking of an unjustifiable risk. There are two levels of recklessness. First, 'subjective' recklessness; this is where the defendant realises that a risk may arise if a certain action is taken, and in spite of this he takes that action and ignores the consequences involved. Second, 'objective' recklessness arises when it is obvious to all that a reasonable prudent person would have realised that there was a risk, so the fact that the defendant may not have even considered whether there were any risks is irrelevant (as a normal person would have in that situation). The idea of subjective recklessness ties in more readily with the policy of punishing someone for something she is morally responsible for, as it takes into consideration the state of mind of the defendant. The concept of objective recklessness, on the other hand, ignores the defendant's mental state, and this could lead to an injustice as some people who are mentally sub-normal (but not insane) ...read more.

However, the defendant would not be convicted if he had wrongly inferred that there were no risks which would have probably also been the conclusion of a reasonable person. This is named the 'Lacuna' of the Caldwell test. Caldwell recklessness now mainly applies to criminal damage, partly due to the injustice that arises in some cases e.g. Elliot V C (1983), where a normal prudent person cannot be compared to a person with completely different characteristics who may not realise the consequences of her actions. A possible alternative method of testing recklessness which would overcome the criticism of unfairness in the current objective Caldwell method, would be to compare defendants to other people with similar characteristics e.g. age, s*x and mental ability as opposed to reasonable prudent men. 2. What problems have the courts found in attempting to define intention and how satisfactorily have they been resolved? Intention is the highest level of mens rea. It is also referred to as specific intention. ...read more.

A child died in the fire. The Court of Appeal suggested that juries ask themselves two questions. One, how probable was the consequence, which resulted from the defendant's voluntary act? And two, did the defendant foresee the consequence? The jury should be directed that they are not entitled to infer the necessary intention unless they feel sure that the consequence was a virtual certainty as a result as a result of the defendant's actions and that the defendant appreciated that this was the case. Finally, the last case that put an end to all this confusion was Woollin (1998). The defendant threw his three-month-old baby towards the pram, which was against the wall some three feet away. The baby suffered head injuries and died. The Lords approved of the direction in Nedrick, provided the word 'infer' was changed to 'find'. However, the House of Lords disapproved of the use of the two questions in Nedrick. It seems that the courts have finally settles on a test for oblique intention, and therefore, is perceived to have been successful in finally finding a definition for this indirect intention. ...read more.